Is science drawing closer to an alien world? 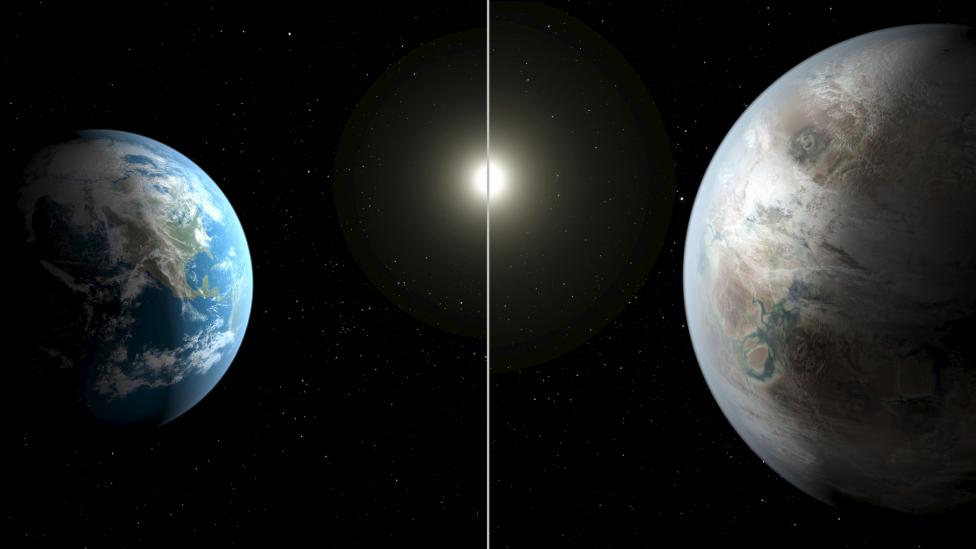 An artistic illustration compares Earth (L) to a planet beyond the solar system that is a close match to Earth, called Kepler-452b in this NASA image released on July 23, 2015. Photo: NASA via Reuters
PARIS: NASA's discovery of Earth-like exoplanet Kepler-452b, nicknamed "Earth 2.0", has social media buzzing about the chances of finding a faraway world, possibly with alien life or key resources such as water. Science or fiction? The experts respond. Is 'Earth 2.0' like our planet? Currently we don't know if this planet is terrestrial -- rocky -- or a small gas planet. If Kepler-452b turns out to be a terrestrial world, it will be the most Earth-like known which also orbits a G-class star like the Sun. The other leading competitors have mostly be found to orbit cooler dwarf stars. There's a real chance we're talking about a terrestrial, potentially habitable exoplanet, with more similarities to our home world than any other place in our Solar System.

Could we settle there? With our best available technology, we have no chances of reaching any exoplanet in the near future! The fastest spacecraft in the Solar System -- NASA's Juno probe -- is currently travelling at almost 86,000 miles (138,000 kilometres) per hour relative to the Earth. At this speed it would take about 33,000 years to reach the nearest star after the Sun, and almost 11 million years to reach Kepler-452b!

So what can we do? If we had a sufficiently large telescope -- and there are people who are studying such concepts right now -- we could actually make the first primitive maps of an Earth-like planet around a nearby star that would provide us details about the atmospheric composition, the surface composition, whether they have oceans, clouds, perhaps even seasons, and start characterising what those planets are like. Whether or not we can discover life, now that is a very tricky question and a very hot topic in astrobiology -- would we recognise those signs of life? And it is a very exciting prospect.

Perhaps in the distant future, human beings will develop the technology necessary to journey out into the galaxy and begin exploring the billions of worlds hidden among the stars. Until then, astronomers will continue to study exoplanets to learn more about the history of our own Solar System, and the nature of the Galaxy in general.

A new world? Given the diversity of the planets discovered to date, I believe we will find a habitable planet yet. I'm sure that one day we will discover a planet similar to Earth in terms of size and other features.

Throughout my childhood, astronomers simply guessed that there might be a few hundred habitable worlds in the Galaxy, but fortunately this turned out to be very pessimistic. The true figure is closer to tens of billions! Particular Earth-like candidates have also thrown up surprises which are fuelling exciting speculation -- as well as research -- on the range of worlds where forms of life might be able to cling on!