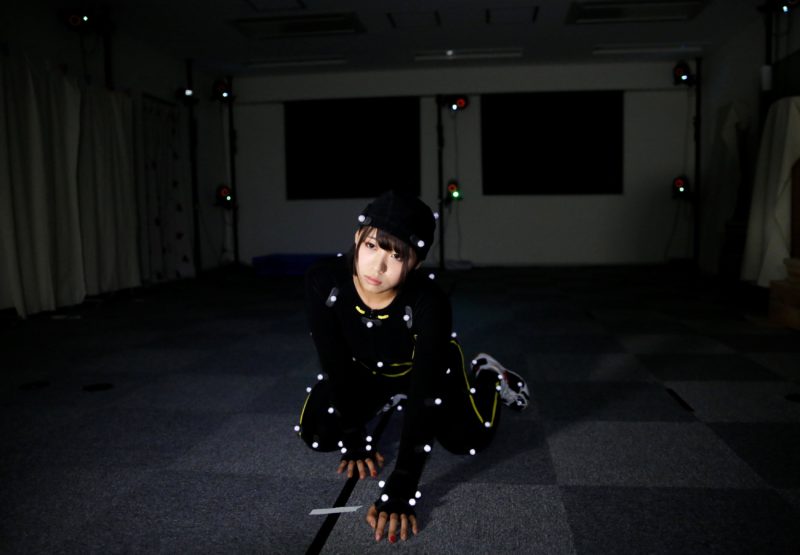 Motion capture actress Yumi Ueno wearing a motion capture suit performs for adult game company Illusion's virtual reality production at a motion capture studio in Tokyo, Japan, on July 25, 2017. Photo: Reuters
TOKYO: At a studio in the Japanese capital, director Taro Kambe peers into a black headset to check a scene from his first video to make use of virtual reality technology. "I have directed hundreds of adult videos but it was my first virtual reality movie," said the 39-year-old. Japan is the world’s second biggest virtual reality market after the United States and the adult entertainment industry and gaming sector are turning to VR as a new way to distribute content. Virtual romantic liaisons for men and women were on display at the Tokyo Game Show on Thursday. Voltage, a developer which creates gaming apps aimed at women, showcased its virtual reality game "Wedding VR", in which players don a headset and tie the knot with an animated male character. The company hopes to roll out the game in Japan’s ubiquitous game centers. Voltage had success last year with a game in which the seated player is approached by a handsome virtual man who reaches in, potentially for a kiss. VR technology remains in its infancy, game developers say, citing its limitations, the approval process from VR set makers, and the small number of users who own VR equipment. However, developers are looking to increase the immersiveness of virtual reality. A user holding a controller from South Korea’s TEGway, for example, experiences the sensation of heat or cold. While the company is initially introducing its technology into arcade machines, it could also be used in devices from VR hardware makers, TEGway Chief Executive Kevin Yi told Reuters. Some analysts have said the adult entertainment industry has helped to drive adoption of new platforms, such as Super 8 film in the 1960s, and later VHS, DVD and early online videos. "Many in the adult industry are pursuing VR content and believe it could revolutionize an industry that has been stagnant for many years," US investment bank Piper Jaffray said in a 2015 report.
#Japan #Virtual reality #Japan video makers #gamers #adult entertainment industry #Wedding VR #Tokyo Game Show #VR technology
You May Also like: