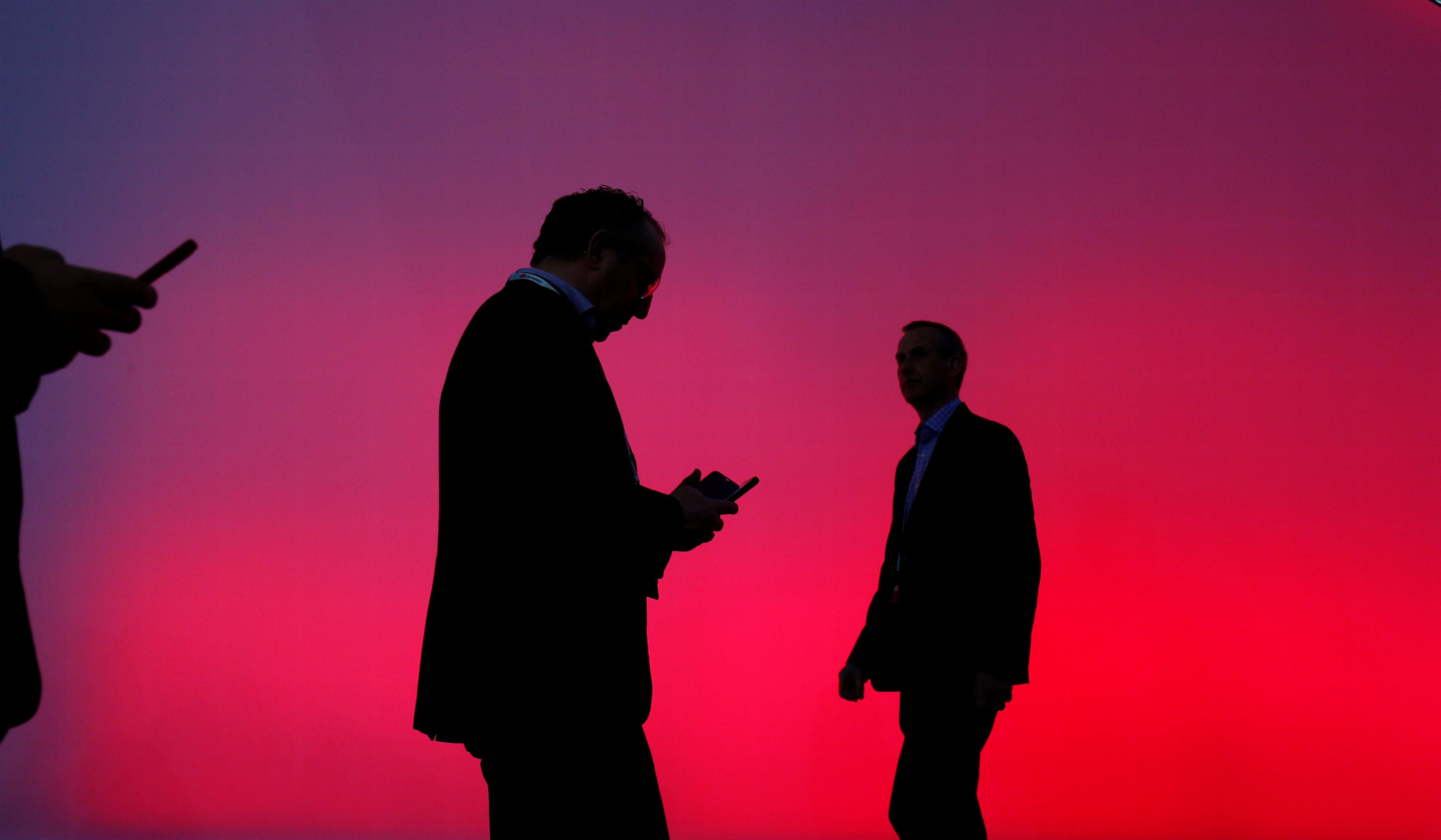 People walk next to Brightstar booth at the Mobile World Congress in Barcelona, Spain on February 25, 2019. Photo: Reuters
BARCELONA: Flexible and folding formats framed the future of smartphones this week as manufacturers focused on new forms in an effort to jolt the market out of uniformity and re-invigorate sales. But anyone hoping to tap or swipe Huawei's Mate X, a smartphone that wraps the screen around the front and back, was soon disappointed at Barcelona's Mobile World Congress. Initial cheers were quickly followed by gasps when the Chinese firm revealed its eye-watering 2,299 euros ($2,600) price tag, although that includes a 5G connection. This is even more than Samsung's Galaxy Fold, which was unveiled last week and will be priced from $1,980 when it goes on sale in some markets in April. It was on display in Barcelona in a glass case like a museum artefact. While the hands-off stance indicates neither firm has a consumer-ready device, 2019 would be remembered as the year of the foldable Ben Wood, chief of research at CCS Insight, said, adding that the new format was still in its infancy. "But we are at the stone age of devices with flexible displays; it's a whole new phase of experimentation after the sea of smartphone sameness we have seen for the last decade." Samsung took the opposite approach to Huawei by putting its folding screen on the inside of its device, with another smaller screen on the front panel for use when it is closed. "That was the solution we felt was best for longevity," Samsung's European Director of Mobile Portfolio & Commercial Strategy Mark Notton told Reuters. Smartphone makers have been trying to innovate to persuade consumers to upgrade from devices which already meet most of their needs, in an effort to reverse falling sales. And although more vendors will soon follow with their own takes on foldable displays, 2019 will not be the year they go mainstream, market analysts Canalys said. They will remain exclusively ultra-luxury devices with fewer than 2 million expected to be shipped worldwide this year, Canalys added. The mobile market slipped 1.2 per cent in 2018, research company Gartner says, although it expects growth of 1.6 per cent in 2019, driven by replacement cycles in the largest and most saturated markets China, the United States and Western Europe. GEARING UP FOR 5G With 5G next generation mobile networks not becoming widely available until 2023 in the United States and China and 2026 in Europe, analysts say, the vast majority of customers will be buying the latest 4G devices like Samsung new Galaxy S10. Nonetheless, manufacturers such as LG were keen to show they could squeeze 5G technology into 4G smartphone form, although most lacked launch or pricing information. Chinese maker OnePlus had a 5G device running a video game using a 5G connection on a show, but visitors were teased with only a glimpse of the phone's screen in a display cabinet. "For us, launching means commercial availability, it doesn't mean PowerPoint," OnePlus co-founder Carl Pei told Reuters. "We are confident we are going to be one of the first with a commercially available smartphone in Europe," he said, adding that this would be within the first half of 2019. Xiaomi Corp, which ranked fifth in smartphone shipments in the last quarter according to IDC, did reveal pricing information along with its first 5G device. "Xiaomi has fired the starting gun with a $599 price. That will bring tears to the eyes of many other mobile phone makers," Wood said, adding that many sub-scale makers such as Sony, LG and others could find it tough to make any kind of margin on 5G. Sony did not show a 5G device, relying instead on its ownership of a major Hollywood studio to release a new line of Xperia phones with a 21:9 display ratio optimised to watch movies and Netflix content.
#China #US #Apple #Samsung #Europe #Huawei #Xiaomi #Sony #LG #5G #Folding Phones #OnePlus
You May Also like: