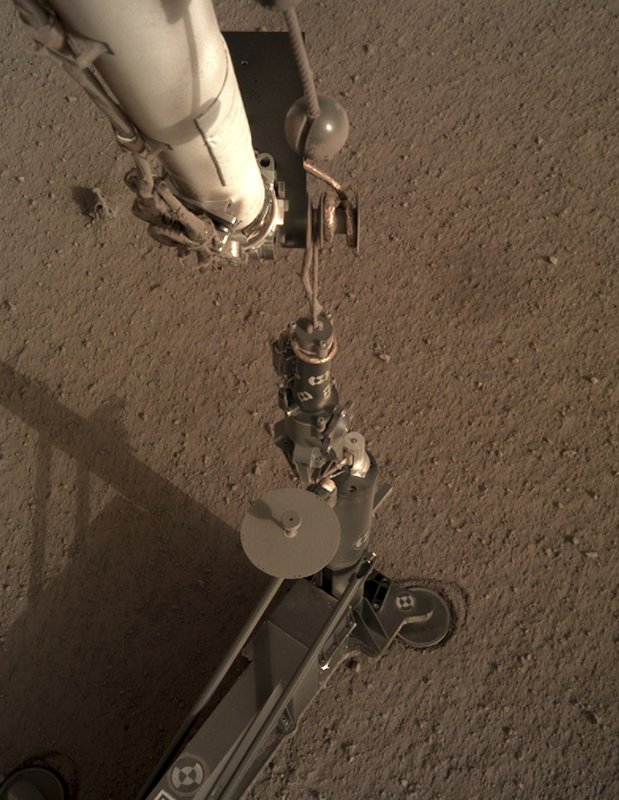 This photo provided by NASA/JPL-Caltech shows an image acquired by NASA's InSight Mars lander using its robotic arm-mounted, Instrument Deployment Camera (IDC). Photo: AP
NASA’s newest Mars lander has started digging into the red planet, but hit a few snags, scientists said Friday. The German drilling instrument on the InSight lander struck what appeared to be a couple of stones. It only managed to burrow between half a foot (18 centimeters) and about 1 ½ feet (50 centimeters), far short of the first dig’s goal, said the German Aerospace Center. The hammering device in the “mole” was developed by the Astronika engineering company in Poland. “This is not very good news for me because although the hammer is proving itself ... the Mars environment is not very favorable to us,” said the company’s chief engineer, Jerzy Grygorczuk. Over time, the team is shooting for a depth of up to 16 feet (5 meters), which would set an otherworldly record. The lander is digging deep to measure the planet’s internal temperature. InSight landed on Mars last November. Flight controllers at NASA’s Jet Propulsion Laboratory in California sent commands to the lander Thursday to begin digging. It’ll rest for a bit before burrowing again. The spacecraft already has a seismometer on the surface, listening for potential quakes. The lander is stationary, but has a robot arm to maneuver these two main experiments.
#NASA #Science #Mars #planets
You May Also like: