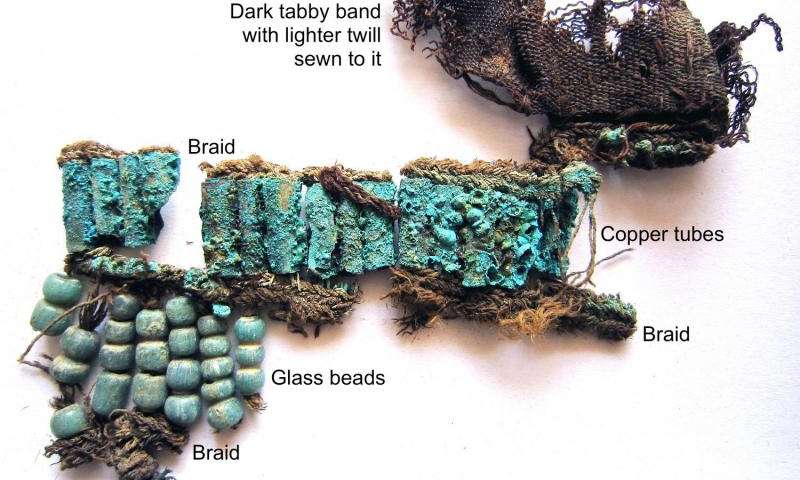 The probable remains of a complex decorative headware, which may have been attached to the gold/silver mask. Image: Margarita Gleba 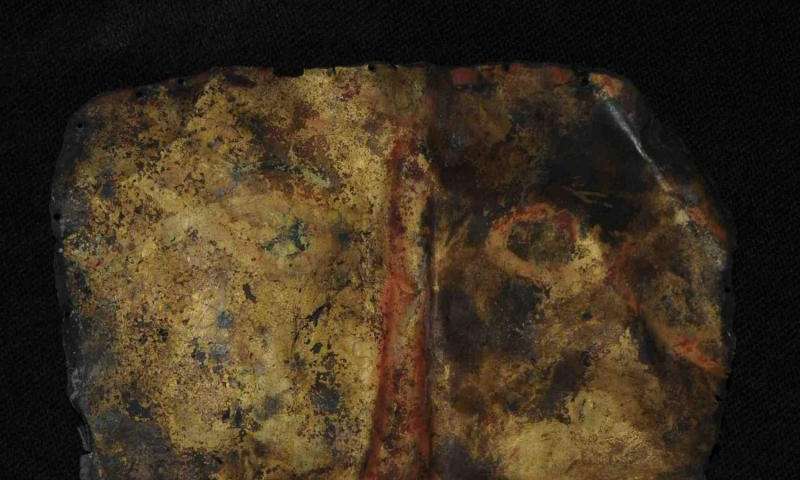 Gold/silver mask believed to cover the face of the adult in the coffin of the Samdzong 5 tomb complex, Upper Mustang, Nepal. Image: M. Aldenderfer 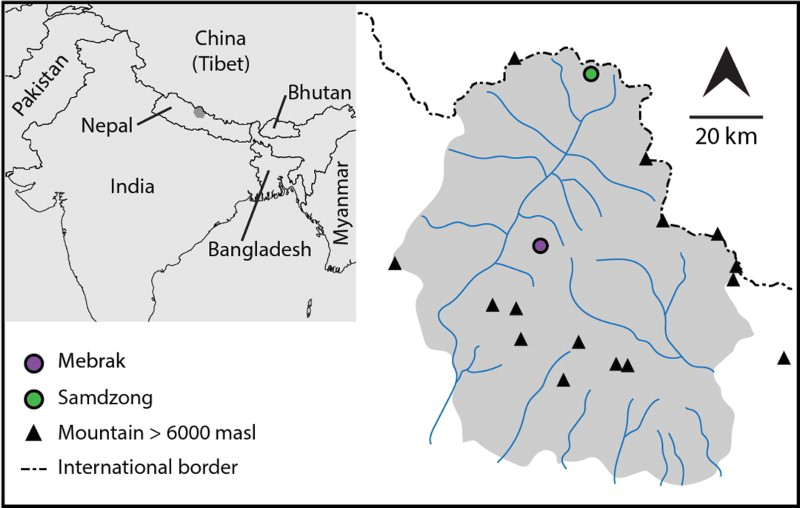 Map indicating the location of the site. Image: Mark Aldenderfer. 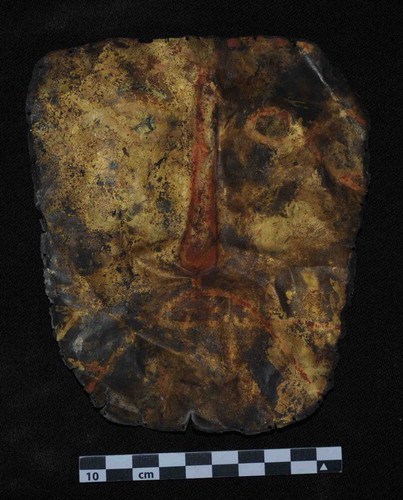 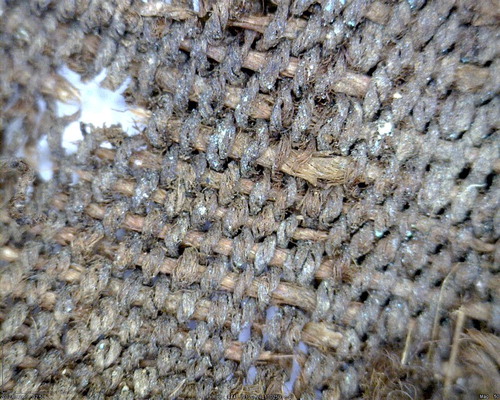 Close-up of the twill weave from Sample 46. Image: Margarita Gleba 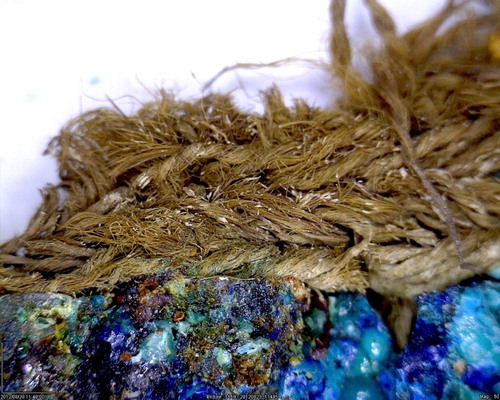 Horizontal braid between the textile and the copper alloy tubes from Sample 46. Image: Margarita Gleba 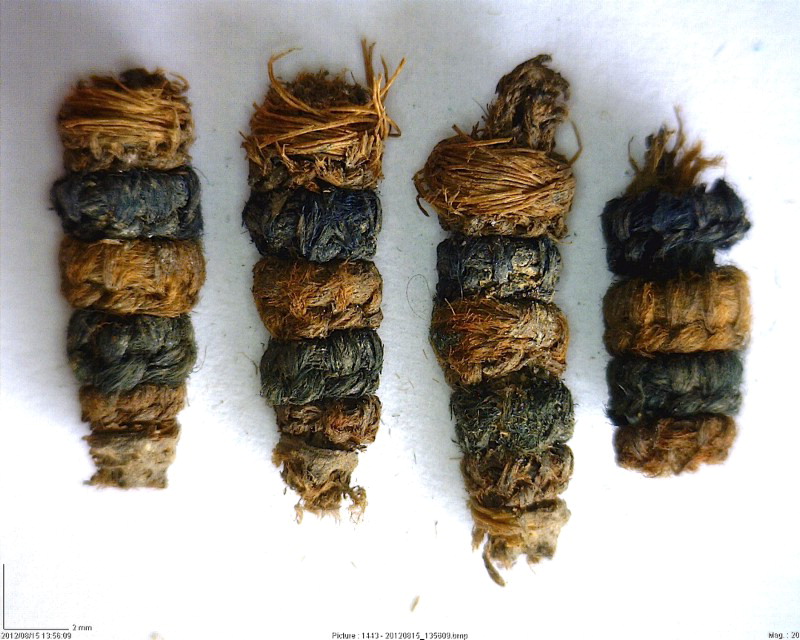 Fine open tabby of silk Sample 50 with irregular red colour Image: Margarita Gleba
KATHMANDU: Scientific analyses of artefacts, dated 400-650 AD,  collected from an archaeological site in Upper Mustang have pointed out Nepal's connection with the Silk Road. The results suggested that the ancient long-distance trade network that snaked through North and East Asia  extended further south than previously thought and included Upper Mustang's Samdzong in Nepal's Himalayan region in it. A paper entitled "Textile technology in Nepal in the 5th-7th centuries CE: the case of Samdzong" has been recently published in the journal STAR: Science & Technology of Archaeological Research, including the results of textile and dye analyses of textiles recovered from the Samdzong tomb complex in Upper Mustang in 2009 and later. Dr Margarita Gleba of the McDonald Institute for Archaeological Research, University of Cambridge, is the lead author of the paper. The first results of textile and dye analyses of cloth remains recovered in Samdzong, Upper Mustang, Nepal, are presented. The site consists of ten shaft tombs, dated between the 400-650 CE, cut into a high cliff face at an elevation of 4000 m asl. The dry climate and high altitude favoured the exceptional preservation of organic materials. One of the objects recovered from the elite Samdzong 5 tomb complex is composed of wool fabrics to which copper, glass and cloth beads are attached and probably constitutes the remains of a complex decorative headwear, which may have been attached to a gold/silver mask. SEM was used to identify the fibre sources of the textiles, which are all of animal nature. Two of the textiles are made of degummed silk. There is no evidence for local silk production suggesting that Samdzong was inserted into the long-distance trade network of the Silk Road. HPLC-DAD analysis permitted identification of a variety of organic dyes, including Indian lac, munjeet, turmeric and knotweed/indigo, while cinnabar was identified through micro Raman spectrometry. The results indicate that locally produced materials were used in combination with those likely imported from afar, including China and India. There is no evidence for local silk production in Samadzong region. The researchers, however, traced degummed silk fibres, munjeet and Indian lac dyes in the textile finds. Based on the results,  they made a conclusion that imported materials from China and India were used along with locally produced materials. "Given the fact that such finds are exceedingly rare in Nepal, their systematic scientific analysis is of exceptional importance for our understanding of the local textile materials and techniques, as well as the mechanisms through which various communities developed and adapted new textile technologies to fit local cultural and economical needs," the paper said. Moreover, the dry climate and high altitude of the Samdzong tomb complex, at an elevation of 4000 m, favoured the exceptional preservation of the organic materials, according to the paper. One of the cloth objects recovered is composed of wool fabrics to which copper, glass and cloth beads are attached. It was found near a coffin of an adult along with a spectacular gold/silver funerary mask. The mask has small pinholes around its edges, suggesting it had been sewn to a fabric, and probably constitutes the remains of a complex, decorative headwear. Samdzong 5 is one of ten shaft tombs excavated by Mark Aldenderfer (University of California Merced and Visiting Scholar of the McDonald Institute), according to the University of Cambridge's Division of Archaeology. The tombs were only exposed to view in 2009 following a seismic event that calved off the façade of the cliff, having been originally carved out in prehistory from the soft conglomerate rock of a massive cliff face. "What seems clear from the analysis of these textiles is a mixture of local and regional strategies for the acquisition of materials, including textiles," Margarita Glebaa, Ina Vanden Bergheb and Mark Aldenderferc wrote in the paper. "Locally produced materials were used in combination with those likely imported from afar. The presence of glass beads from south-east Asia or south India, as well as from Sassania, testify to the place Upper Mustang held in regional exchange networks, and the textile evidence provides deeper insights into other connections." "Together, these data reinforce the notion that instead of being isolated and remote, Upper Mustang was once a small, but important node of a much larger network of people and places."
#Archaelogy #Mustang #Silk Road #Muktinath #Nepal archaelogy #Samdzong tomb complex #Samdzong
You May Also like: