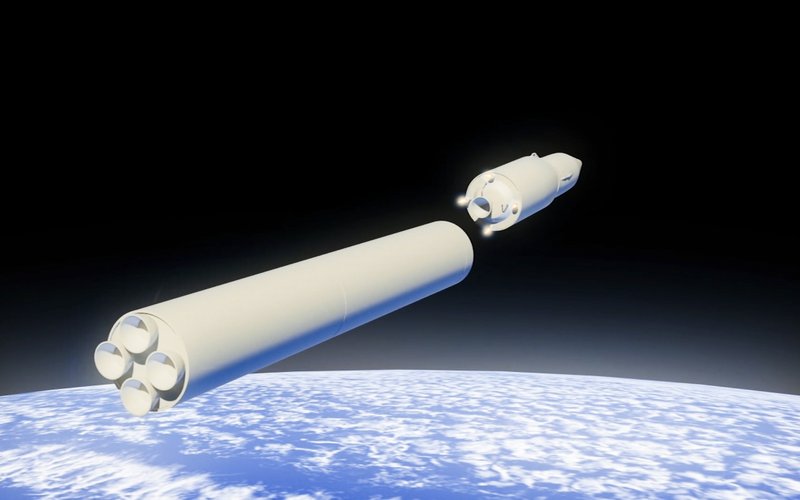 In this video grab provided by RU-RTR Russian television via AP television a computer simulation shows the Avangard hypersonic vehicle being released from booster rockets, on Thursday, March 1, 2018. Photo: AP
MOSCOW: President Vladimir Putin says Russia has developed a range of new nuclear weapons that he claims can’t be intercepted by an enemy. Speaking Thursday in a nationally televised address, Putin said the new weapons represent a quantum leap in military technology and will render NATO’s US-led missile defense system useless. Here’s a look at the weapons he announced. THE SARMAT INTERCONTINENTAL BALLISTIC MISSILE Russia has been working for years to develop a new intercontinental ballistic missile (ICBM) to replace the Soviet-designed Voyevoda, the world’s heaviest ICBM known as “Satan” in the West that carries 10 nuclear warheads. Putin announced that the new missile, called Sarmat, is undergoing tests and a video shown during his speech featured its test launch. Putin said Sarmat weighs 200 metric tons (220 tons) and has a higher range than Satan, allowing it to fly over the North or the South Poles and strike targets anywhere in the world. He added that Sarmat also carries a bigger number of nuclear warheads, which are more powerful than the ones on Satan. Putin said the new ICBM accelerates faster than its predecessor, making it harder for enemy to intercept it in its most vulnerable phase after the launch. He also said Sarmat could carry an array of warheads capable of dodging missile defenses. THE NUCLEAR-POWERED GLOBAL-RANGE CRUISE MISSILE Putin’s announcement that Russia has developed a nuclear-powered cruise missile marks the first time such weapon was officially mentioned. The Russian leader said a compact, nuclear-powered engine gives the new weapon a “practically unlimited” range. He added that it has stealth capabilities making it hard to detect and high maneuverability to bypass an enemy’s defenses. He emphasized that the cruise missile is “invulnerable to any existing or prospective air and missile defense systems.” He said the missile was successfully tested last fall but doesn’t have a name yet. He suggested the Defense Ministry hold a nationwide contest to find the best name for it. THE NUCLEAR-POWERED INTERCONTINENTAL UNDERWATER DRONE Russian news outlets first leaked reports about a nuclear-powered underwater drone called Status-6 several years ago, when its image taken during a Kremlin meeting was shown on national television in what many observers saw as a deliberate leak. On Thursday, Putin announced for the first time that Russia has built such a weapon. He said tests of a compact nuclear reactor that took years were completed successfully in December. Its nuclear reactor is 100 times smaller than those that power modern nuclear submarines and features a super-quick launch time, Putin added. The Russian president claims the new drone has “fantastic” capabilities and can operate at “very big” depth at a speed many times faster than the fastest vessels or torpedoes in use today. He said the drone can carry a nuclear weapon to target both aircraft carrier groups and coastal facilities, adding that “there are no means in the world to counter it now.” The drone’s name is also subject to a nationwide contest. THE KINZHAL HYPERSONIC MISSILE Both Russia and the US have been working to develop missiles that could travel at hypersonic speed, or more than five times the speed of sound. Putin announced Thursday the Russian military in December already put one such type of missile on duty in the Southern Military District. The missile called Kinzhal is carried by aircraft and is capable of flying at a speed 10 times the speed of sound. He added it has a range of more than 2,000 kilometers (1,250 miles) and can carry a nuclear or a conventional warhead. A video that accompanied his statement featured a MiG-31 fighter jet carrying a bulky missile under its fuselage and then launching it during a test flight. A computer animation showed the missile hitting a group of navy ships. THE AVANGARD HYPERSONIC VEHICLE Putin first said in 2004 that Russia was working on a prospective hypersonic weapon that could conduct sharp maneuvers to avoid missile defenses. He announced Thursday that Russia has completed the tests of that vehicle, called Avangard, and put it in serial production. Putin said the Avangard has an intercontinental range and can fly in the atmosphere at a speed 20 times the speed of sound. The Russian leader added the weapon can change both its course and its altitude en route to a target, making it “absolutely invulnerable to any air or missile defense means.” Putin noted that Avangard is designed using new composite materials to withstand temperatures of up to 2,000 Celsius (3,632 Fahrenheit) resulting from a flight through the atmosphere at hypersonic speeds. “It heads to target like a meteorite, like a fireball,” Putin said. His statement was accompanied by a video of the Avangard’s launch and a computer simulation that showed it being released from the booster rocket and maneuvering in the atmosphere on its way to a target, bypassing missile defenses. LASER WEAPONS Both Russia and the US have been developing laser weapons for many years. Putin said Russia has achieved “significant results” in designing such systems, and added that the military commissioned its first laser weapons last year. He would not elaborate, saying only that they will significantly boost the Russian military’s capability. An accompanying video showed a compact laser mounted on a military truck.
#Vladimir Putin #NATO #Europe #nuclear weapons #ballistic missile #laser weapons
You May Also like: