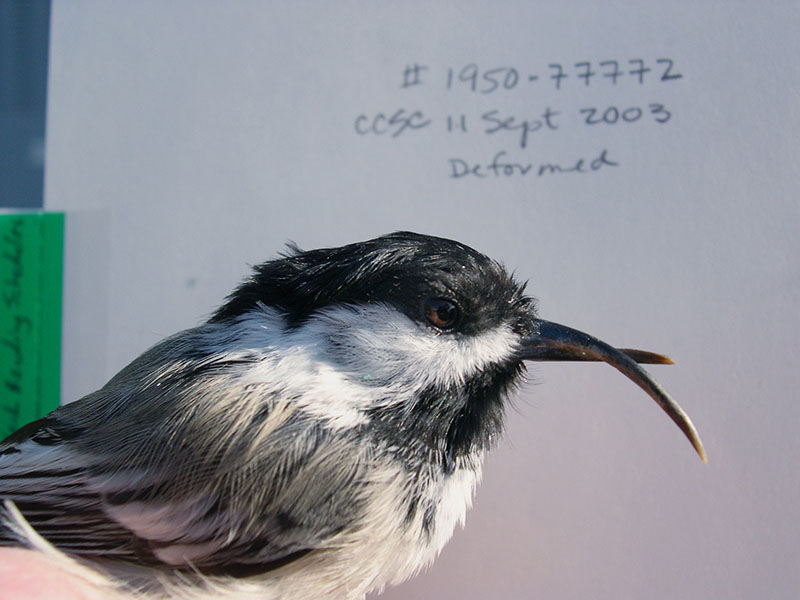 A Black-capped Chickadee with a deformed beak in Anchorage, Alaska, on September 11, 2003. Photo: Handel Colleen/USGS Alaska Science Center via AP
ANCHORAGE: Biologist Colleen Handel saw her first black-capped chickadee with the heartrending disorder in 1998. The tiny birds showed up at birdfeeders in Alaska's largest city with freakishly long beaks. Some beaks looked like sprung scissors, unable to come together at the tips. Others curved up or down like crossed sickles.

A Black-capped Chickadee with a deformed beak in Anchorage, Alaska, on September 11, 2003. Photo: Handel Colleen/USGS Alaska Science Center via AP
Handel, a US Geological Survey bird specialist, was sure the cause of avian keratin disorder would be found quickly: contaminated birdseed, a poison targeting spruce bark beetles, maybe some sort of bacterium or fungus. Years went by. She found herself losing sleep over a mysterious ailment afflicting 6.5 percent of southcentral Alaska's black-capped chickadees and 17 percent of the area's northwestern crows, more than 10 times what is normally expected in a wild bird population. Distorted beaks were spotted in lesser numbers of jays, woodpeckers and nuthatches — 24 species in all. Eighteen years later, after many possible causes were ruled out, Handel and other scientists from California and Alaska who tested beaks of affected birds found a previously unknown virus in every one. "It's the strongest lead that we've got so far," Handel said. Bird beaks have inner layers of bone covered by an outer layer of keratin, the same stuff as fingernails. The disorder affects the outer layer, stimulating the keratin to grow twice as fast as normal. Chickadees look fragile but are one of the few birds to stay through cold Alaska winters. In the dead of winter, the small songbirds can lose 10 percent of their body weight overnight and must eat constantly during short daylight hours. Extended beaks get in the way. "They can't eat enough during the daylight hours to survive overnight, because they're metabolizing the fat they put on during the day," Handel said. "The other thing is that the poor little guys can't preen their feathers very well. You can imagine trying to comb your hair with a pair of 3-foot-long chopsticks." They end up with dirty, matted plumage and feathers that no longer provide insulation. "They've lost their little down coats for winter," Handel said. Some don't survive. Over nearly two decades, researchers pursued multiple paths of research. Last year, Handel and fellow USGS researcher Caroline Van Hemert published a study showing an environmental contaminant, organochloride compounds, were found in affected birds. But the amount was small and there was no obvious source, such as the selenium from agricultural drainage that caused beak deformities in California or PCB and other contaminants that affected birds in Great Lakes states in the 1970s. The mysterious condition appeared only in birds 6 months or older, so it did not seem to be a birth defect. It affected chickadees, which live in the forest, and northwestern crows, which live in intertidal zones. But both birds are social, so it was conceivable they could transmit disease among their species. The potential breakthrough came when researchers at the California Academy of Sciences in San Francisco offered to apply advanced DNA and RNA sequence technology to bird beak samples. Early in 2012, disease ecologist Maxine Zylberberg had an "aha!" moment. She found the birds had RNA of a virus in the same family that causes the common cold and polio in humans and foot-and-mouth disease in cattle. The previously unknown virus was in every sample of deformed chickadee beaks and in two samples of chickadees that did not have distorted beaks. "After that it was a lot of validation, going through and testing more individuals and seeing, 'Is this true?'" Zylberberg said. Researchers are careful to say the virus — named Poecivirus after the black-capped chickadee genus — has not yet been nailed down as the cause of distorted beaks. "It could be that birds who have this disease are more susceptible to this common virus," said Zylberberg, now at the University of California, San Francisco and lead author of the study published July 26 in mBio, a journal of the American Society for Microbiology. To validate their findings, scientists will grow the live virus in laboratory conditions. They also will work to determine whether the virus is in other bird species and how it is being transmitted. In Britain, significant numbers of blue tits, a close relative of black-capped chickadees, have been observed with beak deformities. In all, 36 species with deformed beaks have been documented there. "Now, with this genetic test, we have a way to see, 'Do those birds have the same virus or not?'" Handel said.
#Deformed beaks mystery #Biologist Colleen Handel #black-capped chickadee #US Geological Survey bird specialist #Alaska birds
You May Also like: