SEOUL/NEW YORK: Samsung unveiled a new version of the Galaxy Note smartphone on Wednesday with fast 5G network connection and improved camera features, hoping the premium model helps it revive slumping profit and widen the gap with struggling rival Huawei. Samsung Electronics Co Ltd (005930.KS) has emerged as the biggest beneficiary of Huawei Technologies Co Ltd’s trouble in the second quarter with a nearly 7% jump in smartphone sales, as the Chinese firm sold fewer phones in the global market after it was put on a US trade blacklist in May. 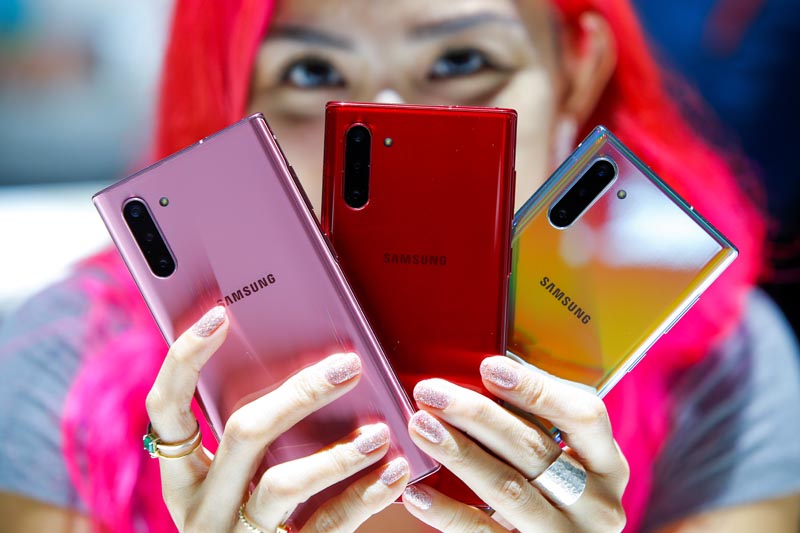 A woman holds different colored models of the Samsung Galaxy Note 10 while people test new devices during the launch event of the Galaxy Note 10 at the Barclays Center in Brooklyn, New York, US, August 7, 2019. Photo: Reuters
With an emphasis on improved video and photography features, which helped Huawei become the world’s No.2 smartphone vendor, Samsung hopes the Galaxy Note 10 will appeal to YouTubers and fans of social media. Along with its first foldable phone, the big-screen Note 10, unveiled at an event in New York on Wednesday, is the South Korean tech firm’s most important new product planned in the second half of this year to expand its mobile sales. With two screen sizes of 6.3 inches and 6.8 inches, the Note 10 boasts enhanced video effects such as augmented reality and stabilization modes, and a front-facing camera centrally located at the top of the display for better selfies. It lacks a headphone jack, a tweak Apple Inc (AAPL.O) made to its smartphones three years ago. The Note 10 will be sold starting at $949.99 while the bigger Note 10 plus will start at $1,099. The Note 10 model with 5G capability will start at $1,299.99. The phone will go on sale from Aug. 23 and square off against Apple’s latest iPhones, which are widely expected to come out later this year. Samsung declined to disclose its sales target for the new Note series but said it expected to achieve higher sales volume than the predecessor Note 9 models. Analysts expect similar shipments of about 9.6 million units, with the likely to be the most important factor in a weak market. The global smartphone market shrank 3% in the June quarter, according to research firm Strategy Analytics. “It is hard to expect strong sales for the new Note with just a few upgrades in its camera features,” said Park Sung-soon, an analyst at Cape Investment & Securities. Samsung is reeling from sagging profits in its mobile division due to weak sales of flagship models, even as it boosted overall shipments by 6.7% and stayed on top with a market share of 22% in the second quarter. Its first foldable phone, the Galaxy Fold, is set to go on sale from September, but analysts say headlines about glitches with sample Folds will dampen consumer excitement around the launch.
#Samsung Electronics Co Ltd. #Samsung #Galaxy Note smartphone #Huawei #5G networks #Galaxy Fold #Note 10 #Galaxy Note 10
You May Also like: