Tagging point of infection that contributed to orca's death 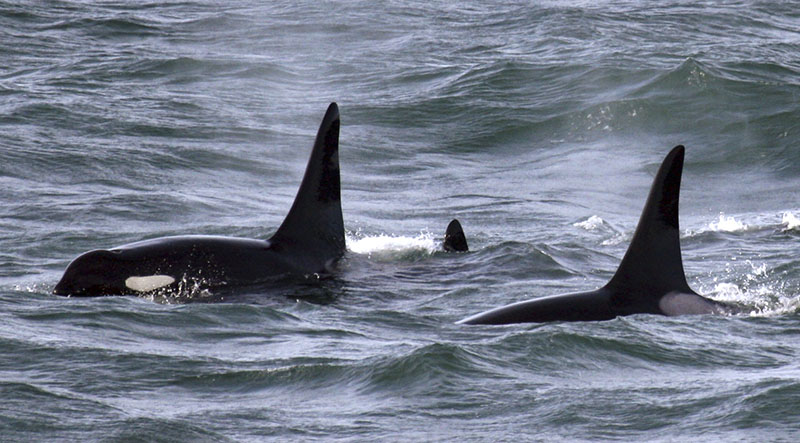 FILE - An orca whale known as L95 (right) swims with other whales from the L and K pods in the Pacific Ocean near the mouth of the Columbia River near Ilwaco, in Washington, on February 27, 2016. Photo: AP

SEATTLE: A satellite-linked tag fired into an endangered Puget Sound orca by federal biologists led to a fungal infection that contributed to the whale's death, scientists said Wednesday.

The National Oceanic and Atmospheric Administration Fisheries said a 20-year-old whale found dead off Vancouver Island in March was found to have fragments of a dart tag in its dorsal fin. The death prompted the agency in April to temporarily halt its tagging program.

Five weeks before it was found dead, researchers fired a small satellite-linked transmitter into the orca to track where the animals go in the winter and how they find food. The transmitter is the size of a 9-volt battery and attaches with two titanium darts just over 2 inches long. It's designed to detach over time and leave nothing behind in the whale.

A fungal infection entered the orca's bloodstream at the spot where it was shot, causing the animal's death, the necropsy found. The fungus may have been introduced by a contaminated tag, or was already on whale's skin and brought deeper by fragments left behind in the animal's body, the examination found.

The tag may have been contaminated when it fell into the sea and wasn't properly sterilized before it was used, possibly contributing to introducing the fungi into the wound, the report by a panel of scientists said.

The agency and its scientists "are deeply dismayed that one of their tags may have had something to do with the death of this whale," NOAA Fisheries' chief scientist Richard Merrick told reporters in a telephone call.

"There's always a risk involved when you're conducting research on wild animals. But it's our job and our obligation to reduce that risks and that's what we'll continue to do," Merrick said.

Some advocates have criticised the tagging, saying it injures the orcas and there are less invasive ways to monitor the small population of whales. There are currently 82 animals.

Ken Balcomb, a senior scientist with the Center for Whale Research in Friday Harbor, said he has been raising concerns for years about the use of the tags, which he called "barbaric and risky."

Several factors may have predisposed the whale to a severe fungal infection, including not completely sterilizing the device, Merrick said. The tag also hit the whale near significant blood vessels, and the whale's health may have been compromised at the time it was tagged in February.

"It's devastating to think this could have happened," said Brad Hanson, the biologist who heads the orca tagging program. He said he was in charge and "completely responsible" for failing to ensure that the tag was properly sterilized.

"We're trying to take stock of the report and comments and figure how best to move forward," he said. Hanson noted the program has produced a tremendous amount of data about the whales in a relatively short amount of time.

But the satellite tagging program will remain suspended until the agency has completed its own review.

NOAA's Northwest Fisheries Science Center in Seattle will also set up an independent panel to review whether satellite tagging of Puget Sound resident orcas should continue.

And NOAA's Office of Protected Resources will consider additional conditions to reduce injury or infection for all future tagging efforts on whales, dolphins and other cetaceans.

The number of southern resident killer whales has fluctuated in recent decades as they have faced threats from pollution, lack of prey and disturbance from boats.

NOAA is considering whether to expand habitat protections for the orcas to include offshore areas from Washington to Northern California, and Merrick said the tagging program has been crucial to understanding the animal's habitat.

The tag has been used numerous times on whales and other marine mammals, as well as eight Puget Sound orcas.