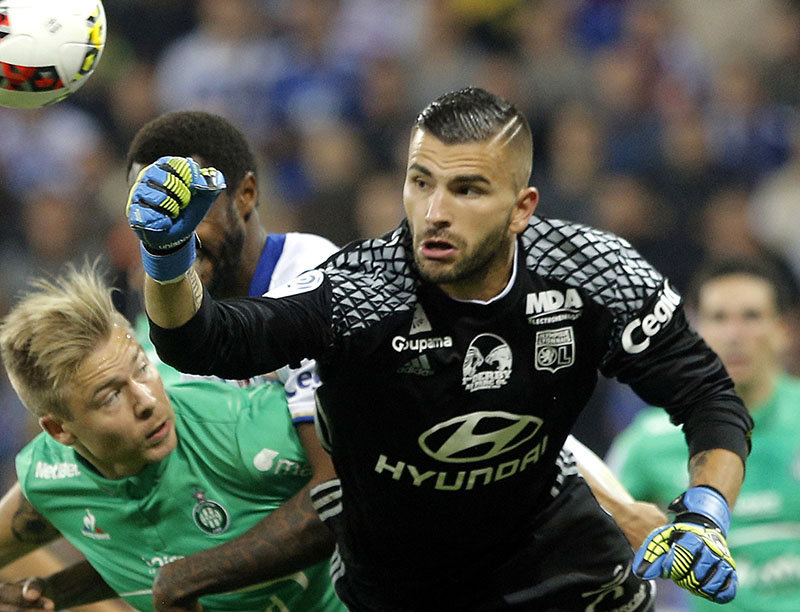 FILE - Lyon's goalkeeper Anthony Lopes (right) bats the ball away during the French League One soccer match between Lyon and Saint-Etienne, in Decines, near Lyon, central France, on Sunday, October 2, 2016. Photo: AP
PARIS: Lyon paid dearly for poor defending as its hopes of catching the top three slipped further away following a 2-0 defeat at bitter rival Saint-Etienne on Sunday. Lyon's players lost their heads at the end with midfielders Rachid Ghezzal and Corentin Tolisso sent off. Tolisso's two-footed challenge on midfielder Fabien Lemoine almost sparked a mass brawl. The game was well over for Lyon by then. Wingers Kevin Monnet-Paquet and Romain Hamouma scored first-half goals as Saint-Etienne dominated the local derby with Florentin Pogba — older brother of Manchester United star Paul Pogba — impressive in midfield. "We're going to make the most of this and celebrate with the fans, let me tell you," Pogba said. The sides are separated by only 60 kilometers (37 miles) and their rivalry is one of the fiercest in French soccer. "You can't play a derby match the way we did tonight, we have no right," Lyon captain Maxime Gonalons said. "I'm from Lyon and I know what this represents." Lyon's humiliation was complete when Ghezzal was sent off in injury time and had to be marched off the pitch by Gonalons. Moments later, Tolisso followed and television cameras captured him kicking out in frustration off the field. In the chase for a Europa League place, Lyon remains in fourth place and has a game in hand on Saint-Etienne, which is one point behind in fifth. But the defeat leaves Bruno Genesio's side 12 points behind Paris Saint-Germain and Nice, and 15 adrift of leader Monaco. Genesio recently called his side a contender for the title, but since saying that Lyon has lost three straight games, also tumbling out of the French Cup this week. The spotlight was on Lyon goalkeeper Anthony Lopes heading into the game. On Tuesday, he was playing in the French Cup against Marseille. For matches in that competition, players don't have their names on the back of jerseys, only their number. Printed inside the number is the name of every team to have won the French Cup. Lopes put a clearly visible black line through Saint-Etienne's name, prompting a furious reaction on social media for which he subsequently apologised. Lyon's players were second to every ball in a frenzied game at Stade Geoffroy-Guichard, a stadium nicknamed "Le Chaudron" (The Cauldron) because of the intense, hostile atmosphere generated by passionate fans priding themselves on their industrial roots. Saint-Etienne, nicknamed "Les Verts" (The Greens), won a record 10 league titles and reached the European Cup final in 1976. Lyon won seven straight league titles from 2002-08. Saint-Etienne's fans unfurled a huge banner to goad their rivals. "You can hate us all you like. You'll end up being eaten up by the Greens," it read, along with an expletive about Lyon. The 700 Lyon fans in the 37,000-capacity stadium watched their team make a string of errors. Argentine defender Emmanuel Mammana lost the ball on the first goal in the ninth minute, failing to control a pass from fellow center back Mapou Yanga-Mbiwa. Norwegian striker Alexander Soderlund fed attacking midfielder Henri Saivet, who slipped a pass through for Monnet-Paquet to run onto and beat Lopes. Lyon almost equalised when Tolisso's header hit the crossbar, but more sloppy play led to the second goal in the 22nd. Lyon lost possession in midfield and Soderlund put Hamouma clean through with a quick pass. Hamouma rounded Lopes as he rushed off his line and stroked the ball into the net. "We're not as good as them individually but we have a lot of heart," Hamouma said. Winger Memphis Depay, who joined Lyon from Manchester United, had a shot saved early in the second half by Jessy Moulin — a backup goalkeeper making his eighth league appearance in 10 years with Saint-Etienne. But overall Depay had a poor game and was replaced midway through the second half. Toulouse 4, Angers 0 New signings Andy Delort and Corentin Jean played a major role as Toulouse ended a four-game losing run. Jean, on loan from Monaco, set up strike partner Delort's opener and won the penalty that Denmark forward Martin Braithwaite converted. Midfielder Oscar Trejo and Sweden striker Ola Toivonen also scored. Toulouse is 10th while Angers remains in the relegation zone. Nantes 0, Nancy 2 Sergio Conceicao's coaching career at Nantes has taken a turn for the worse after a bright start. The former Portugal winger won six of his first seven games, but has now lost three of the last four. Winger Issiar Dia and defender Julien Cetout scored Nancy's goals in the second half. Nancy is up to 11th place, while Nantes is 14th.
#Lyon #French League Cup #Saint-Etienne #French Roundup
You May Also like: