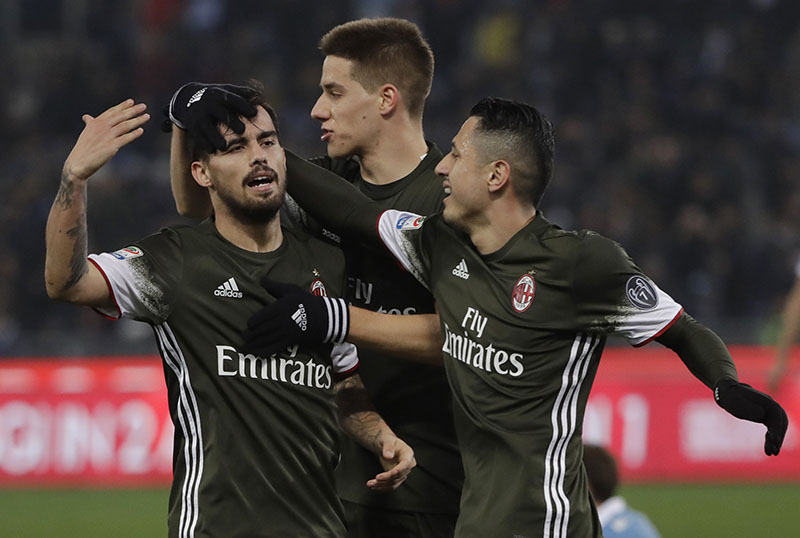 AC Milan's Suso (left) celebrates with teammates after scoring a goal during an Italian Serie A soccer match between Lazio and Milan, at the Olympic stadium in Rome, on Monday, February 13, 2017. Photo: AP
ROME: Suso saved AC Milan from more misery by scoring a late equaliser at Lazio for 1-1 in Serie A on Monday. Milan had lost three straight and was desperate to change course in a key match for the Europa League places. Lazio remained sixth, three points ahead of Milan, with the top six teams likely to qualify for Europe. Milan has finished outside the top six for three straight seasons. "There's a long way to go, a lot of matches to play, but this is a big point," Suso said. "We'll fight until the last match to get back into Europe." Midfielder Lucas Biglia converted a penalty in first-half injury time for Lazio after Milan's 17-year-old goalkeeper, Gianluigi Donnarumma, was whistled for tripping Ciro Immobile. Donnarumma kept Milan in the match with tough saves then Suso evaded three defenders to score with a delightful solo effort inside the area five minutes from time. Milan has scored four of its last eight Serie A goals after the 85th minute. As usual, Milan struggled in the first half, conceding the most shots (16) and shots on target (eight) in the first half of any Serie A match this season. "We didn't play a great match and they scored in a key moment before the half. But we left everything we had out on the pitch in the second half," Suso said. "It's a well-earned point."
#AC Milan #Lazio #Italian Roundup #Italian soccer Serie A
You May Also like: