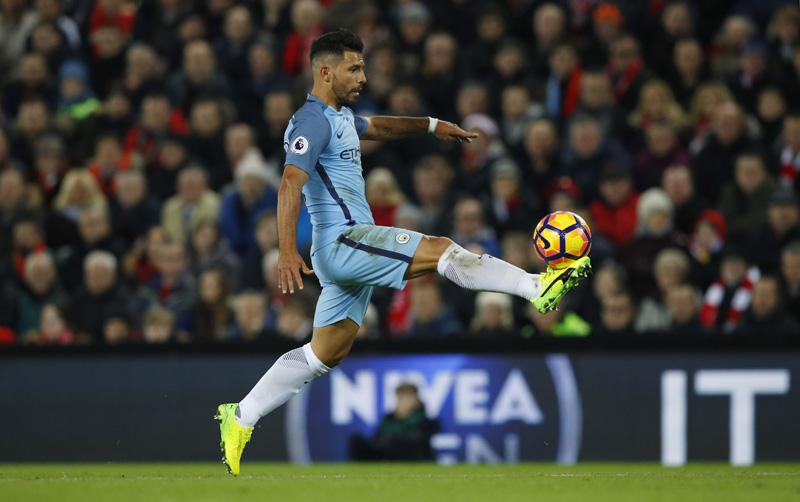 Manchester City's Sergio Aguero in action. Photo: Reuters
LONDON: Manchester City striker Sergio Aguero has a big future with the club despite being dropped to the bench in recent weeks, manager Pep Guardiola said on Friday. Aguero is City's top scorer, with 18 goals in 25 appearances this season, but faces a fight to get back into the team for Sunday's clash with Swansea City after missing Wednesday's impressive 4-0 win at West Ham United. "There is no doubt about the quality of Sergio. I can say how happy I am with what he did - except the seven games when he was banned," Guardiola told reporters. "The big clubs in Europe always have a lot of strikers - and there has been at this club too - (Mario) Balotelli, (Carlos) Tevez, Sergio, (Edin) Dzeko all together. "In the big clubs, you see at Real Madrid, Barcelona, Juventus - at Madrid (Alvaro) Morata doesn't play. Big clubs need a lot of strikers and we do." The signing of young Brazil forward Gabriel Jesus has done little to help Aguero's cause but Guardiola is confident he can find a way to field both the 19-year-old and the explosive Argentine in his starting line-up. "Gabriel is 19 years old, but has settled quickly. He takes English lessons every single day and that means a lot to me," the former Barcelona manager added. "In Brazil, Gabriel played on the left side. Both can play together. Gabriel is a fighter. That's why he can help us a lot." Experienced midfielder Yaya Toure was recalled to City's Champions League squad on Thursday. "Yaya has a quality that is difficult to find today. He loves football, he love to play - he's like an amateur," Guardiola added. "I love that. I like to play with guys like him. At the end it becomes a profession and you have to do that but he is like an amateur in those terms." City are fifth in the table, 10 points behind leaders Chelsea after 23 games.
#Premier League #Manchester City #Pep Guardiola #Sergio Aguero
You May Also like: