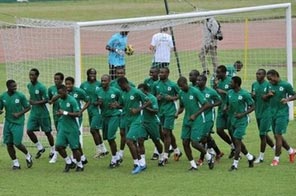 Players of Ivorian national football team (Elephants of the Ivory Coast ) are pictured during a training session in September, at Houphouet Boigny stadium in Abidjan. Ivory Coast need one point at bottom-of-the-table Malawi Saturday in Group E to clinch a second successive appearance at the World Cup. Source: AFP

JOHANNESBURG: Algeria, Cameroon, Ivory Coast and Tunisia could qualify for the 2010 World Cup in South Africa this weekend.

But the other three potential qualifiers need help if they are to realise the ultimate dream of every footballer and feature at the first World Cup hosted by Africa.

Algeria, who last played at the finals 23 years ago, can clinch top spot in Group C by securing a better result at home to Rwanda Sunday than African Nations Cup holders Egypt away to Zambia Saturday.

Cameroon, revitalised since the recent arrival of French coach Paul le Guen, will take an unassailable lead in Group A if they defeat Togo at home Saturday and Morocco triumph at second-placed Gabon the same day.

And Tunisia could qualify a record-equalling fourth consecutive time for an African team by beating Kenya in Rades Sunday if Nigeria do not collect maximum points when hosting Kenya in the other Group B fixture at the same time.

The other slot allocated to Africa has been filled by Ghana with Chelsea midfielder Michael Essien scoring the first goal in a 2-0 home victory over Sudan that assured an unassailable Group D advantage.

South Africa, who play friendlies in Norway Saturday and Iceland Tuesday, qualify automatically as hosts, giving Africa six finalists out of 32 for the first time.

Ivory Coast have been hard hit by injuries ahead of their match at the Kamuzu Stadium in Blantyre, losing Manchester City defender Kolo Toure, midfielder Cheik Tiote and strikers Kader Keita and Boubacar Sanogo.

But Chelsea strikers Didier Drogba and Salomon Kalou are available and the 'Elephants' should take at least one point off rivals they beat 5-0 last March in an Abidjan game marred by 20 overcrowding-related fatalities.

Hassan Yebda, scorer of the lone goal at Wolves last weekend that gave Portsmouth a first English Premiership victory of the season, and fellow midfielder Djamel Abdoune have received first call-ups from Algeria.

The France-born duo are the latest to benefit from a FIFA ruling allowing footballers to switch national allegiance after representing their country of origin at age-limit level.

Le Guen, who guided Lyon to four French titles in a row before experiencing less success with Glasgow Rangers and PSG, took Cameroon from the bottom to the top of Group A with home and away victories over Gabon last month.

Tunisia stayed two points ahead of Nigeria after snatching a 2-2 draw in Abuja last month and Portuguese coach Humberto Coelho has brought back France-born strikers Lassaad Nouioui and Jamel Saihi.

The final round of African fixtures is scheduled for Saturday November 14 and after tense climaxes to the last few World Cup qualifying tournaments, it would be a shock if all five places had already been filled.

While the five group winners go to South Africa for the June 11 to July 11 World Cup, the top three in each mini-league secure places at the 2010 African Nations Cup from January 10-31 in Angola.