Allenby takes the lead on a bum ankle 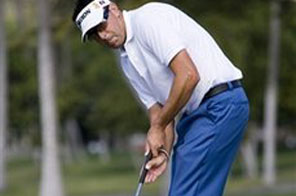 Robert Allenby, of Australia, putts on the 13th green during the second round of the Sony Open golf tournament, Friday, Jan. 15, 2010 in Honolulu. Source: AP

HONOLULU: With a bum ankle, Robert Allenby is trying to keep it simple at the Sony Open. The strategy is working beautifully through two windy rounds that put the Australian atop the leaderboard.

Allenby aimed for fairways and greens, and spots where he could easily save par if anything went wrong, and he put together a 3-under 67 on Friday that gave him a one-shot lead over Steve Stricker and John Merrick among the early starters.

Stricker has gone 24 holes without a bogey and shot a 67, while Merrick had a 68.

Allenby was flying high when he landed in Honolulu, ending last year with consecutive victories in South Africa and Australia. Going for a walk with wife Sandy he stepped awkwardly off a curb and badly twisted his right ankle.

He continued his walk to Diamondhead, and only when he returned to his room did he notice the swelling. He flew too far to withdraw, and besides, he might be better off this way.

"I'm managing my way around the golf course," said Allenby, who was at 8-under 132. "When you feel good, you play a little more aggressively. Now I'm backing off a little bit, hitting into little areas, hoping to make up-and-down or hit it close. I've still got the confidence I could win the tournament."

Troy Matteson, who spent most of last week at Kapalua bringing up the rear, had another 67 and was in the group at 6-under 134 that included Shane Bertsch (68), while past Sony Open winner Paul Goydos rallied with a 63 and was at 135.

Goydos thought he played well Thursday and shot 72. He made a few more putts on Friday and noticed a big difference, mainly the numbers on his card. What really stood out were three birdies on the par 3s. Even a former substitute math teacher can figure that out.

Stricker has never felt better, coming off a three-win season that elevated him to No. 3 in the world. He came out of his long winter break in Wisconsin hitting the ball well, yet even a guy in good health and appreciate what Allenby is doing.

Waialae is a stark change from last week at expansive Kapalua, with tiny fairways that wind along skinny palms, and smaller greens that put a greater premium on accuracy.

"You can't be very aggressive here," Stricker said. "It's position golf. If you start missing fairways and hit out of the rough, it's difficult to get the ball close. So the first objective is getting it on the fairway. Pars are good scores."

That's a testament to good courses, yet the winning scores indicate otherwise.

Defending champion Zach Johnson, among the late starters Friday, won last year at 15 under. Goydos won at 14 under and David Toms won in 2006 at 18 under.

If anything Waialae rewards good play.

"There are birdie opportunities, Stricker said. "But the easy holes can jump up and grab you."

Merrick can appreciate that. On the 338-yard 10th hole, he went left of the fairway and let his wedge slide too far to the right, leaving him an awkward up-and-down that led to a bogey. He did enough right, however, to give him a chance going into the weekend. In his fourth year, Merrick has learned enough to realize he can't play it too safe.

"You can't wait around. You have to grab it," he said. "You've got to keep the foot down. If you're not, someone else is."

#Allenby takes the lead on a bum ankle
You May Also like: