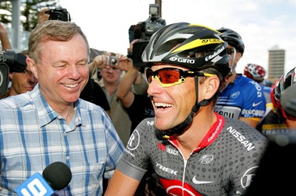 Lance Armstrong of Team RadioShack is seen talking to the media in Adelaide, on January 15. Source: AFP

The seven-time winner, who finished third behind Astana team-mate Contador in July, said he had a better chance of victory this year -- but would pass up the chance to become the Tour's oldest champion if instructed by his coach.

"We'll be in the same position where we have three strong guys in the Tour," Armstrong, 38, told reporters ahead of the Tour Down Under here.

"Sure I'd love to win another one. But if somebody else is in a better position to win, then we have to support him."

Spain's Contador has voiced anger about internal tensions at Astana, claiming the team failed to gel behind him as it wrestled to accommodate cycling's two biggest stars.

"With the precious help of a few people, I resisted the pressure," he told RIDE Cycling Review magazine.

Ex-Astana director Johan Bruyneel, who has moved with Armstrong to the new Team RadioShack, said he was "frustrated" by the comments, maintaining Contador became the team's focus as soon as it was clear he was the strongest rider.

"I think 2009 was a clear example of a team working as a team no matter who they had to work for," Bruyneel said. "I'm a bit frustrated about the comments that he didn't have any help. That was absolutely not the case."

Armstrong and Contador have been involved in a bitter verbal war since the race, prompting the American to describe this year's showdown as "Ali-Frazier".

Contador, a two-time Tour winner who is tipped to challenge Armstrong's record seven titles, has called their relationship "non-existent" and describes Luxembourg's Andy Schleck as his "authentic rival".

But Armstrong warned that he expects an improved performance in France this year as he returns to peak form and slims down charity work in the second season of his comeback.

The Texan, who turns 39 in December, is bidding to outstrip Belgian Firmin Lambot's 88-year-old achievement in winning the Tour de France aged 36 years and four months in 1922.

Armstrong, who famously survived testicular cancer to win seven consecutive Tours from 1999 to 2005, has given himself another two seasons to achieve his goal.

The American cut short his three-and-a-half year retirement at last year's Tour Down Under, placing 29th. On Saturday, he demonstrated his enormous popularity by attracting some 5,000 amateurs to an impromptu ride announced on Twitter. Related article: Thousands join Armstrong's 'Twitter ride'

Contador, 27, is not racing in the season's curtain-raiser, opting instead to kick off his year at Portugal's Tour of the Algarve next month.

#Armstrong says he'd sacrifice Tour record for team
You May Also like: