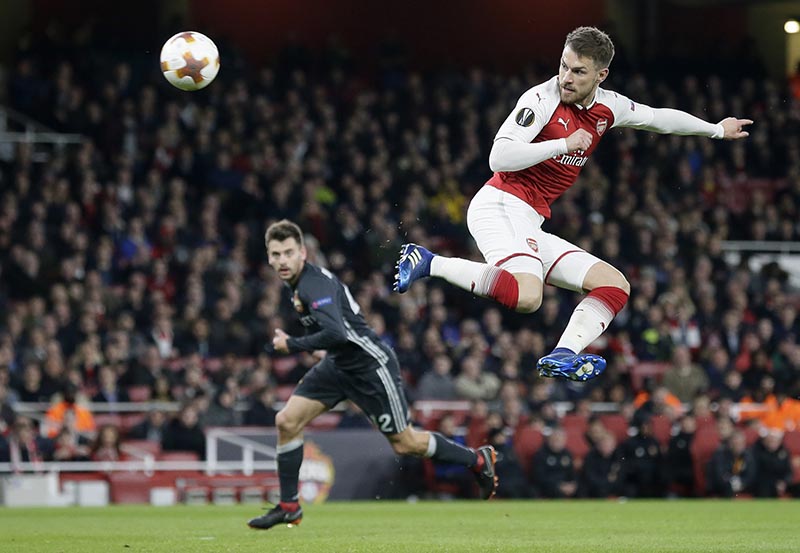 CSKA's Georgi Schenniko (left), looks om as Arsenal's Aaron Ramsey, right, scores his sides third goal during the Europa League quarterfinal, first leg soccer match between Arsenal and CSKA Moscow at the Emirates stadium in London, on Thursday, April 5, 2018. Photo: AP
LONDON: Arsenal took a huge step toward securing a place in the last four of the Europa League by beating CSKA Moscow 4-1 in the first leg of the quarter-finals on Thursday. All the goals were scored in the first half, with midfielder Aaron Ramsey and returning striker Alexandre Lacazette netting twice for the Gunners. "It was a spectacular first half played at a high pace but, as well, an uncomfortable one for me because they looked dangerous as well," said Arsenal manager Arsene Wenger. Arsenal, which has now won five games in a row in all competitions, goes into next Thursday's second leg in the Russian capital in a commanding position. Wenger said failing to extend the lead in the second half may help the team keep its concentration. "We know it's not over and we have to go there with the right focus and try to win the game," he said. In a disappointing season that sees the team occupying sixth place in the English Premier League, way behind in the race for one of the four Champions League berths, the Europa League is the club's last chance of a trophy. Winning European football's second-tier competition would give Arsenal a route back into the Champions League. Wenger said it was "too early" to talk about winning the trophy but believed the team had recovered its confidence after a difficult spell this year which included a 3-0 defeat to champions-elect Manchester City in the League Cup final. Arsenal took a deserved lead in the ninth minute when Ramsey fired in from close range after crisp interplay in and around the CSKA penalty area. Against the run of play, Aleksandr Golovin leveled in the 15th minute with a dipping, curling free-kick that flew into the top corner beyond the dive of goalkeeper Petr Cech. Lacazette, in his first start since late January, restored Arsenal's lead in the 23rd minute from the penalty spot after Mesut Ozil was clumsily brought down by Georgi Schennikov. Arsenal went 3-1 ahead in the 28th minute with probably the best goal of the match. Ozil floated a ball over the CSKA defense to a leaping Ramsey who volleyed it past goalkeeper Igor Akinfeev from eight meters with the heel of his right boot. Lacazette made it 4-1 in the 35th minute, again after a series of swift passes. Ozil provided the assist once again with a cutback from the touchline to the France striker, who drilled it into the net with a left-footed drive. Arsenal had several chances to extend its lead in the second half and Ramsey went close to his second career hat trick following his previous one in February, when he struck the post in the 78th minute. "He's a much better finisher nowadays, he's calmer, the way he finishes, you see he's composed," Wenger said. "Before he rushed a bit."
#Arsenal #quarter-finals #Arsene Wenger #Europa league #CSKA Moscow #Alexandre Lacazette #Aaron Ramsey
You May Also like: