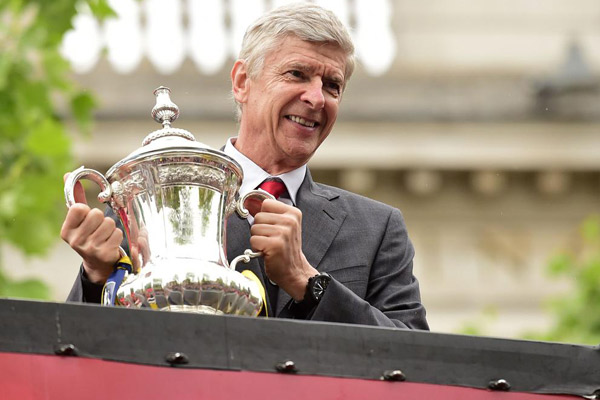 Arsenal's French manager Arsene Wenger holds the trophy from the top deck of an open-topped bus during the Arsenal victory parade in London on May 31, 2015, following their win in the English FA Cup final football match on May 30, 2014 against Aston Villa. Photo: AFP/File
LONDON: Arsene Wenger has dismissed a boast from Arsenal director Lord Harris that the Gunners can afford to buy virtually any player in the world. After several years of caution in the transfer market due to the cost of moving to the Emirates Stadium, Harris was quoted this week as saying Arsenal have a surplus of around £200 million that Wenger can dip into to bolster his squad. Harris claimed only Barcelona's Lionel Messi and Real Madrid's Cristiano Ronaldo were beyond Arsenal's reach and he backed Wenger to break the club's record fee of £42.5 million paid to sign Mesut Ozil from Real Madrid in 2013. But Arsenal manager Wenger, who has so far signed only Chelsea goalkeeper Petr Cech for £11 million during the close-season, said on Friday that Harris's comments were over the top. "He's gone a bit overboard. It's not true," Wenger said. "Our opponents, if they really want, have that money to spend. So it is not something that is absolutely exceptional and money in the bank doesn't mean profit. We lost money the last six months. "You can be bankrupt and have £200 million in the bank. If you have £500 million to spend three weeks later, you need to find £300 million. "We are in a strong financial situation, a healthy one. I don't want to go too much into it. "I can understand that it makes headlines in the media, the amount of money, but what we want is to focus on the quality of your work and players and style of play and performance. That is what football is really about." Wenger has been linked with a host of players since the end of last season, with Real Madrid striker Karim Benzema and Juventus forward Fernando Llorente the latest names reportedly on his wanted list. But the Frenchman, speaking ahead of Saturday's home friendly against Lyon in the Emirates Cup, made it clear he is happy with a squad that won the FA Cup last season and finished strongly in the Premier League. "Last week I had to answer questions about what I was going to do with all the players who are available and the next week it's why don't you buy?" he said. "Last week we scored goals without (Alexis) Sanchez and (Danny) Welbeck. We are in a strong position with a strong squad I am happy with. If the opportunity turns up, we could still do something. "We built up something special last season - a good team dynamic and confidence level, a convincing and efficient style of play. We want to work on that and not expect too much from outside. "The truth will come from inside the squad. We have to focus on the quality of our performance inside the group."
#Cristiano Ronaldo #Lionel Messi #football #Real Madrid #English Premier League #Arsenal #Arsene Wenger #Player transfer #English Premier League club #Lord Harris #Mesut Ozil #etr Cech
You May Also like: