As Suarez writes himself into Barca history, Coutinho looks dispensable 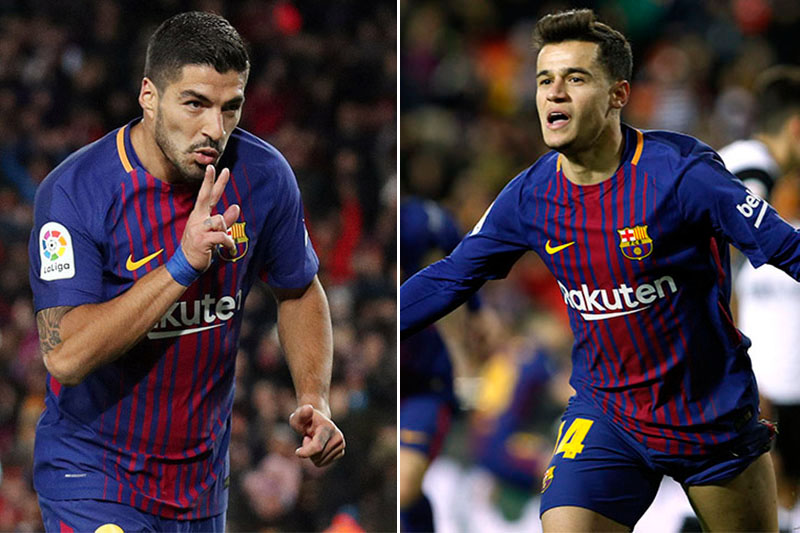 BARCELONA: Luis Suarez and Philippe Coutinho traded places as Liverpool's talismanic figure before earning dream moves to Barcelona, but while the Uruguayan has become one of the Catalan side's greatest strikers ever, the Brazilian is seen as an expensive flop.

Suarez was named PFA player of the year in the 2013/14 season for leading Liverpool's charge to the brink of the Premier League title, before they were pipped at the post by Manchester City.

Liverpool took years to recover from him leaving for Barca in 2014 for a club record 75 million pounds, finishing sixth and eighth respectively in their next two seasons until Juergen Klopp transformed their fortunes.

"When I was there, it was very different," Suarez said in a recent interview with The Guardian.

"We were on the verge of the Premier League with a squad nowhere near as good. They didn't spend as much as they're doing now. Any player would like to go to Liverpool now. It was different then."

Coutinho eventually took up the baton from Suarez as Liverpool's most influential player and helped spark the revival, but they have had no such struggles since the Brazilian departed in January 2018 for an eye-watering 142 million pounds.

They invested that money on Virgil Van Dijk, Alisson Becker and Naby Keita, creating a more complete squad that has earned a staggering 91 points in another race to the wire with City.

Coutinho and Suarez have also had contrasting careers in Catalonia: The Brazilian has become accustomed to being booed by supporters in recent months for failing to live up to his price tag, while Suarez has etched his name into the club's history.

It is easy to forget that Suarez was a maligned figure when he joined Barca after biting Italy's Giorgio Chiellini at the 2014 World Cup, and that the club he had just joined were in transition, showing signs of decline.

Suarez, however, proved to be the link the Catalans were missing, an insatiable goalscorer who could also free space for his team mates with his physical presence and work rate.

The 32-year-old is the second top goalscorer in La Liga this season with 21 strikes, only trailing his inseparable friend Lionel Messi, who has 34.

Last week, Suarez became Barca's all-time third top scorer in the league with 131 goals, while on Saturday he collected a fourth league title out of five, his 13th medal with Barca.

Things seemed much easier for Coutinho when he joined a fully formed, all-conquering side and had a role waiting for him in the team as Andres Iniesta prepared to depart.

Yet he has frequently looked out of place, struggling when played in midfield or on the left wing, notching only 10 goals and five assists in all competitions and missing his share of gaping scoring chances, looking like a player shorn of confidence and ever more anxious.

With France forward Ousmane Dembele back at full fitness, Coutinho is unlikely to start on Wednesday against Liverpool, meaning he may be an onlooker in a game he would have been expected to star in a year ago.

Suarez, meanwhile, will take centre stage in the blockbuster duel, as invaluable to Barca as he was to his former club.