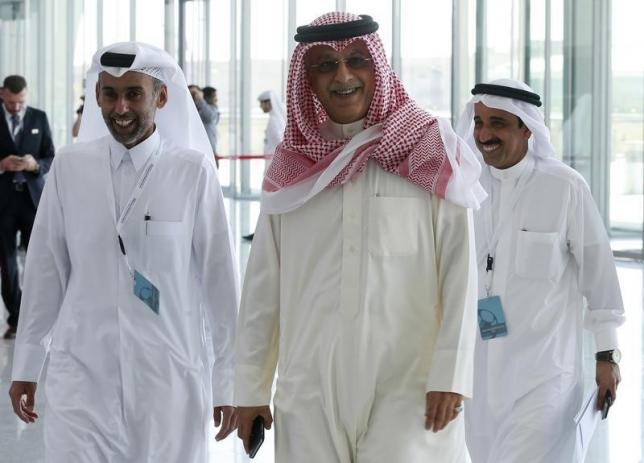 Asian Football Confederation (AFC) head Sheikh Salman bin Ebrahim Al-Khalifa arrives for a meeting with the FIFA task force in Doha February 24, 2015. REUTERS
KUALA LUMPUR: Asia's football chief Sheikh Salman bin Ebrahim Al Khalifa called for the region to unify behind one candidate in next year's FIFA presidential election and stopped short of endorsing UEFA president Michel Platini for the job on Thursday. Former France skipper Platini ended weeks of uncertainty on Wednesday when he announced that he would stand for the post with the mission of restoring "dignity" to soccer's world government in the wake of a major corruption scandal. South Korean Chung Mong-joon, a major power broker in Asian football, announced that he would also be joining the race soon after the Asian Football Confederation released their statement. Asia was a bedrock of support for outgoing president Sepp Blatter, who decided to stand down amid the worst crisis in FIFA's history, and the number of votes from the region will make it highly influential in next February's election. "We have of course noted Michel Platini's decision to stand, and he is certainly a unique candidate who would bring stability and a smooth transition to normality for FIFA in this difficult situation," the AFC president said in a media release. "Yet we should also remember that the FIFA president is only one part of FIFA, which is why it is so important to get the reforms right as well. "Everybody accepts the need for change in FIFA, and in addition to changing the president much of the rest of FIFA’s organisation and the way it functions need to be modernised as well. "FIFA also needs someone who can take the best of the past, fuse it with new ideas, and so take the organisation into the future." Jordanian Prince Ali bin Al Hussein, who lost to Blatter in the first round of last May's presidential ballot before withdrawing, said on Wednesday that Platini's candidature would not be good for FIFA. Prince Ali, who is yet to announce whether he intends to run again, said FIFA needed new, independent leadership "untainted by the practices of the past" in order for proper reform to take place. An AFC statement echoed his call for a "new FIFA and a new FIFA president", even if the fact that Prince Ali did not have the backing of his home confederation when he took on Blatter last year indicates that Asia is unlikely to vote as a bloc. "FIFA is in a very difficult position right now. In order to stabilise it needs leadership, experience and new ideas, but above all it needs football to be placed at its heart," Sheikh Salman added. "Hopefully a new president can bring many of these things, which is why it is so important for Asia to remain as united as possible behind the single best candidate for football, regardless of where they are from."
#FIFA #Sheikh Salman bin Ebrahim Al Khalifa #UEFA president Michel Platini
You May Also like: