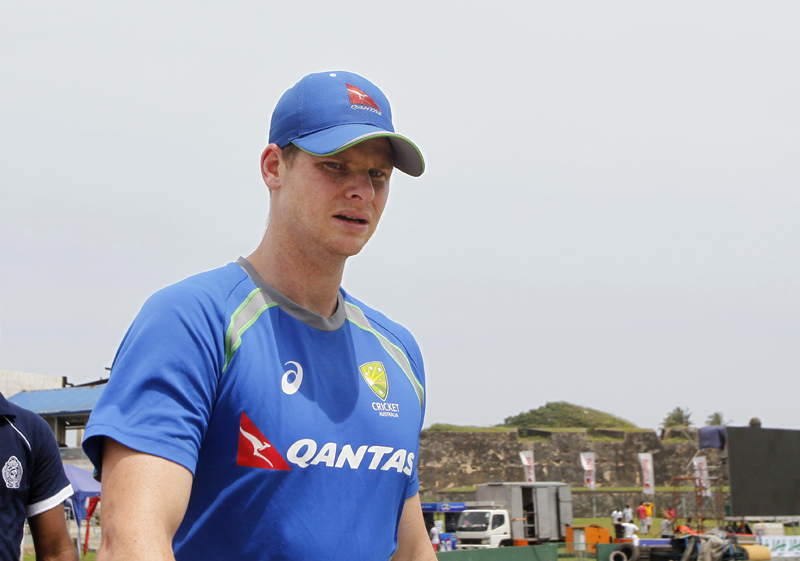 Australian cricket team captain, Steve Smith, leaves the ground after a practice session ahead of their second test match against Sri Lanka in Galle, Sri Lanka, Wednesday, August 3, 2016. Photo: AP
COLOMBO: Australia captain Steve Smith is to leave the tour of Sri Lanka and return home to rest ahead of their limited-overs series in South Africa before they host the Proteas at the start of a heavy home schedule. Vice-captain David Warner will lead the side for the remaining three one-day internationals and two Twenty20 matches against Sri Lanka. "It's obviously going to be a big summer with South Africa and then six tests at home then limited-overs matches against New Zealand," Smith told reporters after his side lost the second one-day international against Sri Lanka by 82 runs in Colombo on Wednesday. "It was talked about that they give me a little break at some point. We had a few discussions, myself, (coach) Darren (Lehmann) and Rod (Marsh), who also consulted with the other selectors. "It took a bit of convincing to get me over the line because I hate missing cricket but in the long run a little bit of a break will do me the world of good." Australia were hammered 3-0 in the test series, finding it difficult on the turning pitches in Sri Lanka, but achieved a three-wicket win in the first one-day international in Colombo. Fast bowler Nathan Coulter-Nile has also been ruled out of the remaining three ODIs in the Sri Lanka tour with a lower back injury and will not be replaced in the squad, Cricket Australia said in a statement. "Nathan had been experiencing a gradual increase in lower back pain which is now preventing him from bowling at match intensity," Australia physiotherapist David Beakley said. "He will now return to Perth for further investigation which will determine the extent of the injury and possible return to play timelines." Peter Nevill, Australia's wicketkeeper for tests, will replace Matthew Wade for the two T20 matches with batsman Chris Lynn and all-rounder Glenn Maxwell also joining the 13-man squad for the shortest format. "Peter is the incumbent wicket-keeper in the T20 side and had a very good World T20 for Australia, the panel wanted to keep that consistency heading into these two matches," national selector Marsh said. "Both Chris and Glenn are dynamic players who are both capable of winning a game from their own bat and they also bring that x-factor in the field." T20 squad: David Warner (captain), Scott Boland, James Faulkner, Aaron Finch, John Hastings, Travis Head, Moises Henriques, Chris Lynn, Shaun Marsh, Glenn Maxwell, Peter Nevill, Mitchell Starc, Adam Zampa
#Australia #Steve Smith #Sri lanka #James Faulkner
You May Also like: