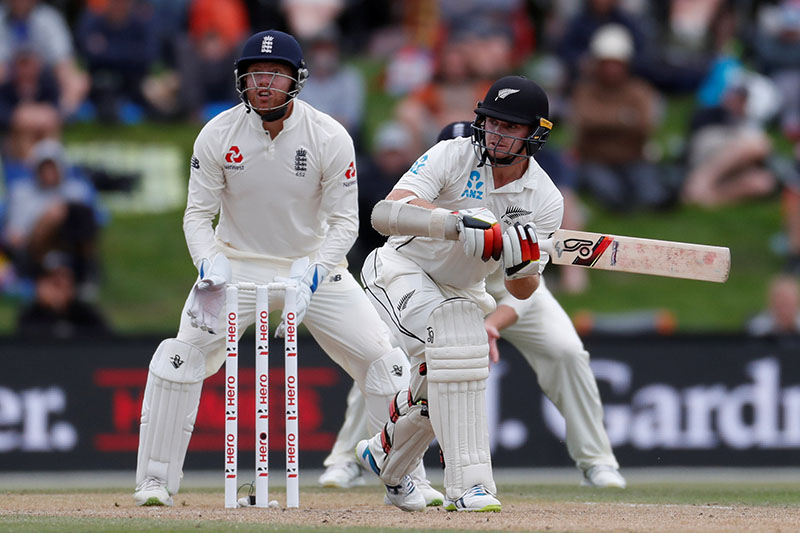 CHRISTCHURCH: England's bid to win the second test against New Zealand and level up the series was hindered by bad light on Monday when play was abandoned early with the hosts 42 without loss chasing an unlikely 382 for victory.

The tourists, without a win in their last 12 overseas tests and needing victory to save the two-test series after losing the opener in Auckland, declared their second innings closed on 352-9 earlier on day four at Hagley Oval.

New Zealand openers Tom Latham, who had made 25 not out, and Jeet Raval, unbeaten on 17, will resume on the final day on Tuesday after weathering an early storm from the seamers and a period where declining light forced England to bowl spin.

England's Jonny Bairstow, who backed up his first innings century with a bright 36 from 54 balls, said the tourists were confident they could take the 10 wickets to get the job done on Tuesday.

"We've seen that if you put the ball in the right areas, we've beaten the outside edge consistently," he told reporters.

Problems in getting a full day's play at a ground without floodlights might have been expected this far into the year, especially after the official end of New Zealand's summer came with the changing of the clocks at the weekend.

England had still looked in a strong position to get the win they required to stymie New Zealand's hopes of a first series triumph against them since 1999 when bad light also brought an early end to day three on Sunday.

Having made 307 in their first innings before dismissing New Zealand for 278, they resumed on 202-3 and pushed cautiously towards a position where they might declare later in the day.

Joe Root and Dawid Malan both reached the half-century mark -- a 39th for the skipper, number six for his partner -- before a double strike in three balls saw them depart for 54 and 53 respectively to leave their side 278-5 at lunch.

England's next four wickets went for only 70 runs, more than half of them coming from the bat of Bairstow with Root calling his players in once the wicketkeeper had departed.

After New Zealand's pace spearhead of Tim Southee and Trent Boult had taken all of the England wickets on the first three days of the match, Colin de Grandhomme finally got the other home bowlers in on the act.

The all-rounder's gentle medium pace accounted for Malan, Ben Stokes (12), Stuart Broad (12) and Mark Wood (9) and he finished with figures of 4-94.

New Zealand just need a draw to take the series 1-0 and batting coach Craig McMillan said it would be quite an achievement if they managed to bat out the final day.

"Series wins have been few and far between for New Zealand test sides, in terms of history it would be very special," he said.

"But there's a big day with a lot of cricket ahead tomorrow, so there's a lot of work still to be done."

England in strong position at end of third day

#New Zealand #England #TEST MATCH CRICKET
You May Also like: