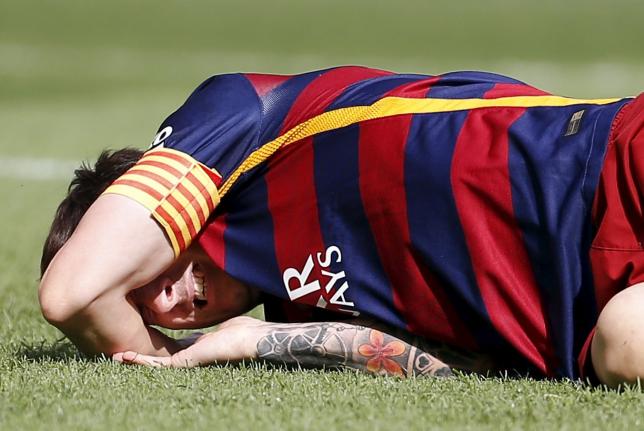 Barcelona's Lionel Messi grimaces as he lies on the pitch after injuring his left knee during their Spanish first division soccer match against Las Palmas at Camp Nou stadium in Barcelona, Spain, September 26, 2015. REUTERS/Sergio Perez
BARCELONA: Barcelona coach Luis Enrique woke up on Wednesday confronted with the twin problems of a lengthening injury list and the first signs of discontent this season among the demanding fans at the Nou Camp. Barca's Spain playmaker and captain Andres Iniesta was the latest to be sidelined, following the likes of Lionel Messi and Rafinha, picking up a thigh muscle strain that local media suggested could keep him out for more than a month. To make matters worse, some supporters began whistling the team when they were trailing Bayer Leverkusen 1-0 in Tuesday's Champions League Group E game, although they were soon silenced as Barca stormed back to win 2-1 thanks to late goals from Sergi Roberto and Luis Suarez. It may seem incredible that some home fans are angry a mere four months after Barca secured a treble of Champions League, La Liga and King's Cup titles but their performances of late have been less than convincing and supporters in Spain are notoriously impatient. Luis Enrique said Barca would remain competitive despite the rash of injuries and hit back at the disgruntled fans, saying the players deserved greater respect. "We need more support from people when things aren't going our way," Luis Enrique told a news conference. "You can clearly hear the whistles from beside the pitch," added the former Barca and Spain midfielder. "If we are not running enough fine but the team made a big effort. There are going to be players out there (due to the injuries) who need confidence not whistling." One reason Barca have been left short is a FIFA ban on registering players for the past two transfer windows. Barca bought Turkey playmaker Arda Turan and versatile Spain midfielder Aleix Vidal in the close season but as things stand neither can play until January. Barca have asked permission to register Arda due to Rafinha's long-term knee injury and local media have reported they are prepared to take their fight to the Court of Arbitration for Sport (CAS) if necessary. Tuesday's victory lifted Barca to the top of the section on four points from two matches, with Leverkusen second on three points, level with BATE Borisov. BATE beat AS Roma 3-2 on Tuesday and the Serie A side are bottom on one point. Barca's next outing is a La Liga game at Europa League holders Sevilla on Saturday.
#Luis Enrique #Champions League #Lionel Messi #La Liga #King’s Cup #Barcelona coach #Barca's Spain playmaker #captain Andres Iniesta #Barca hit by injuries #Nou Camp
You May Also like: