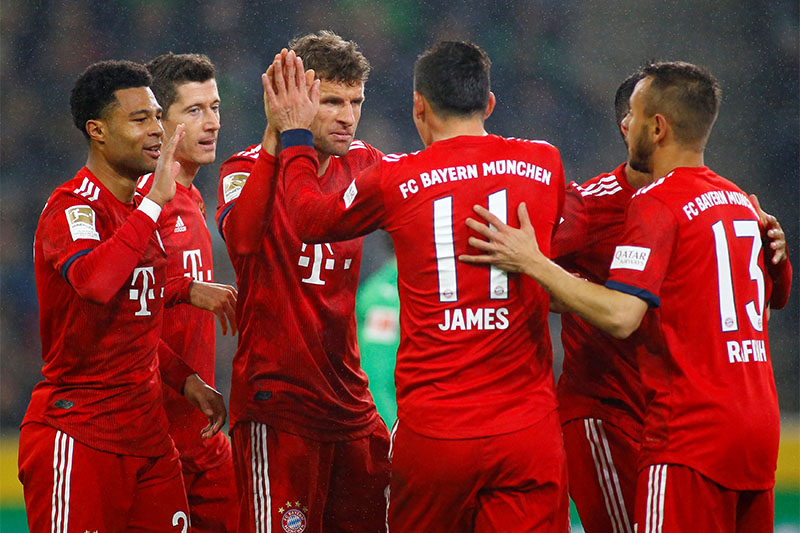 Bayern Munich's Thomas Mueller celebrates scoring their second goal with team mates. Photo: Reuters
BERLIN: Champions Bayern Munich demolished hosts Borussia Moenchengladbach 5-1 to join leaders Borussia Dortmund at the top of the Bundesliga and reignite the title race on Saturday. Rejuvenated Bayern, who have now won 11 of their last 12 league games, scored twice in the opening 11 minutes through Javi Martinez and Thomas Mueller before two second-half Robert Lewandowski goals ensured the most straightforward of wins. Gladbach lost their third straight league home game by at least three goals for the first time in their club history. Bayern, who were seven points off the top a few weeks ago, are now level on 54 with Dortmund, who lost 2-1 to Augsburg on Friday. Gladbach drop to fourth on 43. "I am very satisfied with our game and we could have scored one or two goals more," said Bayern coach Niko Kovac, whose team face Liverpool in the Champions League Round of 16 second leg later this month. "It was one of our best games this season. We have now reset everything and the title race starts again from zero." Lewandowski, who joined Claudio Pizarro on 195 goals at the top of the all-time foreign scorers' list in the Bundesliga, almost opened his account after 35 seconds when his shot was saved by Yann Sommer but the resulting corner was headed in by Martinez. Bayern doubled their lead in the 11th minute when Mueller latched on to a Serge Gnabry cross to slot in with his second effort. They then missed several golden chances to increase their lead and instead it was Gladbach's Lars Stindl who scored to cut the deficit in the 38th. Lewandowski restored their two-goal advantage two minutes after the restart to make it 120 Bundesliga goals with Bayern and climb to third on their all-time scorers' list. Gnabry drilled in from close range in the 75th before Lewandowski completed the rout with a stoppage-time penalty. Schalke 04 coach Domenico Tedesco is on the brink of an exit after his team lost 4-0 at home to promoted Fortuna Duesseldorf to stay in 14th place, seven points above the relegation zone. RB Leipzig climbed to third place on 45 points after beating Nuremberg 1-0.
#Champions League #Bayern Munich #Germany Bundesliga #Niko Kovac
You May Also like: