Beating England not as easy as it looked, says Kohli 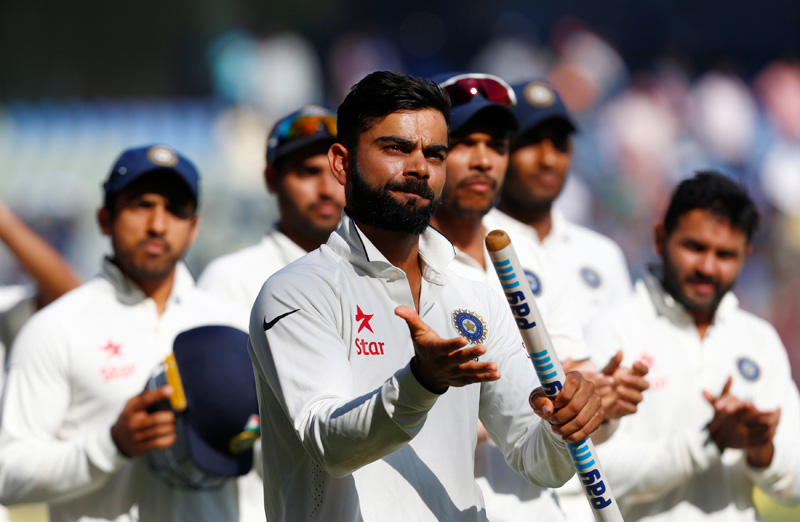 India's Virat Kohli (L) celebrates with team mates after winning the match. Photo: Reuters
MUMBAI: India's unassailable 3-0 lead over England has not been achieved as comfortably as it might appear against quality opposition, captain Virat Kohli said on Monday. India thrashed England by an innings and 36 runs just over half an hour into the final day at the Wankhede Stadium to clinch the series with a match to spare. READ ALSO England were the last team to win a test series in India, 2-1 four years ago, and they made a strong start in the drawn test in Rajkot this time round. "I don't think it's been easy. We have been put under pressure many times. I think I would give my team a lot of credit for bouncing back from those tough situations," Kohli told reporters. "We haven't got anything on the platter. We have had to work hard for it and it's been a result of constant pressure that we have forced the opposition to make mistakes." Trailing 2-0 in the series, England posted 400 in their first innings in Mumbai and had the hosts, ranked number one in the world, in trouble by reducing them to 307 for six. But man of the match Kohli hit 235 to rescue his team and led them to a massive first-innings total of 631. "With the bat as well we have shown really good character to come back into the game, showing enough patience, more than the opposition," the 28-year-old said, adding it was the best out of his five series wins as captain. "No series win is easy, especially not this one, we know England is a quality test side and we knew that they will try to bounce back. "Even in this game after being 2-0 down, they put 400 runs in the first innings. This is not a team that will throw in the towel. We were tested but we came out on top." It was the fifth consecutive series win for India following triumphs in Sri Lanka and West India and home victories over South Africa and New Zealand. Kohli was pleased with the unselfishness of his team mates. "A lot of the times, you have an hour in the test match where you can take the game away and you are still not willing to go for it because you are close to your milestone or things like that," he said. "These are the things that we have gotten out of our system completely."
#India #Virat Kohli #England #James Anderson
You May Also like: