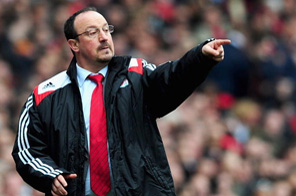 LIVERPOOL: Rafa Benitez is refusing to rule Fernando Torres out of Liverpool's match with Birmingham City on Monday - despite telling Spain to forget about playing the striker in next week's prestigious international friendly with Argentina. Torres travelled to Spain following Liverpool's 1-1 draw away to Lyon in the Champions League on Wednesday to see a specialist in an attempt to ascertain whether the groin injury that has troubled him for the past month requires surgery.
Benitez has confirmed that the striker is suffering from a sports hernia, a problem that was sustained while the 25-year-old was on international duty with Spain last month.
Having picked up the injury, Torres missed Liverpool's matches against Sunderland in the Premier League on October 17 and Lyon at home in the Champions League three days later.
Since then he has been substituted in each of his club's past three matches as Benitez has attempted to stop the problem becoming more severe. Benitez revealed on Saturday he had been in touch with Spain to inform them that he does not think Torres is fit enough to face Argentina in Madrid on November 14. Yet with Liverpool's season in danger of imploding, Benitez admitted he may have to turn to Torres for Birmingham's visit of Monday. The Merseyside club have won once in eight outings to leave themselves in danger of being eliminated from the Champions League while they started the weekend nine points adrift of Premier League leaders Chelsea after losing five of their first 11 games. "Yesterday I was talking with the Spanish clinical director and fitness coach and they know that Fernando needs to work hard with the physios and improve his fitness condition," the Liverpool manager said.
"Torres has gone to Spain to see a specialist," added Benitez. "We know that he was a little bit better than before. There are still some problems and he will be working with the physios. "We'll have to make a decision whether he can play against Birmingham." Asked whether Torres, who has scored 10 league goals this season, will require an operation, Benitez replied: "It's a question of carrying on and seeing how he reacts." Benitez is also refusing to rule influential captain Steven Gerrard out of his plans for Birmingham even though the England midfielder has missed 15 days of training. "There's a big difference between players being fit and players being available," added the Spaniard. "Gerrard was training yesterday on his day off with the physios, so he is improving. Will he be fit? We don't know. Will he be available? We don't know. "He has not been training with the team for 15 days. Can he be on the bench? Can he play? We don't know at this moment in time." Glen Johnson and Albert Riera are also doubts for a match Benitez has labelled a must-win game. But Alberto Aquilani could get his first taste of Premier League action following his 20 million pound move from Roma in August. "The league is a long race so we have to keep going," added Benitez. "I am confident the team will be in the top four and will do well. "Birmingham have a good manager and they know now what the Premier League is about because they have some experience. "I think they are a good team and will have a good season. But we have to win on Monday." Despite Liverpool's struggles, Birmingham manager Alex McLeish is under no illusions as to the task facing his side at Anfield. "It's at Anfield, they have a pretty good record there, they won their last game there against the champions (Manchester United) so we are under no illusions about how tough a task it is," said McLeish. Birmingham's on-loan.

#Benitez still counting on Torres for key Blues game
You May Also like: