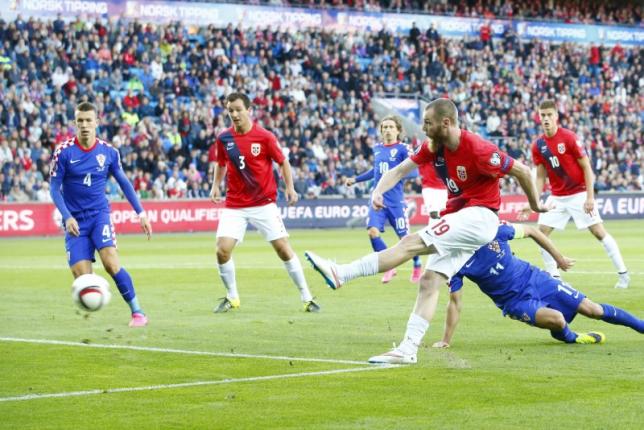 Norway's Jo Inge Berget scores against Croatia during their Euro 2016 Group H qualifying soccer match at Ullevaal stadium in Oslo, September 6, 2015. Photo: Reuters/NTB Scanpix
OSLO: Jo-Inge Berget scored twice in the second half to propel Norway to the top of Group H after a 2-0 win over Croatia in their Euro 2016 qualifier on Sunday. Hammered 5-1 in Zagreb in March, the surprise victory put the Norwegians on 16 points, one ahead of Croatia and Italy, who play Bulgaria in Palermo later on Sunday. In a tight and tense first half, Croatia striker Mario Mandzukic came closest to breaking the deadlock just before halftime with his fine header forcing Orjan Nyland into a flying save. Mandzukic twice went close early after the break before Berget put the hosts in front, snapping up Vegard Forren's deflected shot and sending Ivan Rakitic sliding in the wrong direction before rifling home with his left foot in the 51st minute. Berget scored a similar second 18 minutes later, this time wrong-footing Darijo Srna before thumping another left-footer which took a deflection off Vedran Corluka's toe before flying into the net. Mandzukic almost reduced the deficit in he 77th minute but his deft flicked volley went wide of the far post, but despite concerted Croatian pressure they could not breach the resolute Norwegian defence. Norway now face Malta at home before travelling to Italy for their final game, while Croatia host Bulgaria before visiting the Maltese for their final qualifier.
#Croatia football #Euro 2016 qualifier #Norwary football
You May Also like: