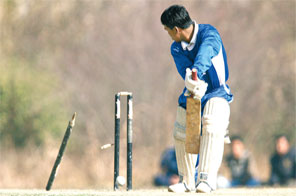 Bhawendra Magar of Biratnagar looks at his stumps rattled down by Birendra Bista of Baitadi during their Boost Under-16 National Cricket League match in Pulchowk Engineering Campus on Friday. Source: Udipt Chhetry

KATHMANDU: Region-II (Birgunj) advanced to the final of the Boost U-16 National Cricket League with fourth consecutive win while Region-VI (Baitadi) registered their first win here today.
Held at the Birendra Sainik Awasiya Mahavidyalaya grounds in Bhaktapur, Birgunj hammered Region-IV (Bhairahawa) by 10 wickets to maintain their lead in the standing with eight points from four matches. Openers Chakra Prakash Shah (29) and Rahul Pratap Shah (28) chased the 60-run target in 13 overs.
Singh's 31-ball innings included five boundaries while his partner struck three fours in 47 balls. Man of the Match Rahul was the pick of the Birgunj bowlers with three wickets as Bhairahawa were all out for a paltry 59 runs in 20.2 overs. Rajeev Shah also grabbed three wickets while Gopal Singh and Mustakim Miya took one wicket apiece. Bhairahawa opener Swichan Shah (26) was the only batsman to score in double figures. Sushan Bari was the next highest scorer with nine runs. Four of the Bhairahawa batsmen were out for ducks.
At Pulchowk Engineering Campus grounds, Baitadi defeated Region-I (Biratnagar) by four wickets to register their first win in the tournament after three back-to-back losses. Baitadi have now climbed to the fourth spot with two points in the six-team tournament.
Man of the Match Vikram Singh Thalal scored a magnificent not out 61 as Baitadi surpassed 156-run target in 36.5 overs. Baitadi had a shaky start with opener Dipendra Chand heading back to pavilion with only two runs on the board. Thalal then steadied the ship sharing an 84-run stand with Tapendra Saud (36) for the second wicket.
Thalal also had a 50-run partnership with Sameer Nagarkoti (24) to guide the team to victory. Hari Chaulagain, Prajwal Katuwal, Lilan Kharel, Rimesh Regmi and Shailendra Ram picked up a wicket each for Biratnagar.
Electing to bat first, Biratnagar scored 155-9 in 40 overs. Biratnagar were struggling at 85-6 inside 27 overs but a 53-run stand between Birendra Dahal (20) and Hari Chaulagain (23) help them post a challenging score. Their total was boosted by 47 sundries,
Birendra Bista and Jagadish Chand picked up three wickets each for Baitadi while Arjun Chapagain, Yddha Bikram Chand and Sameer Nagarkoti claimed one each. The loss means Biratnagar are at the bottom of the table without a win in three matches. Bhairahawa re second with two wins from three matches, ahead of Nepalgunj, who have two points from as many matches.
On Saturday, Bhairahawa will take on Nepalgunj at Army grounds in Bhaktapur, while Biratnagar are up agaisnt Kathmandu at Pulchowk grounds.