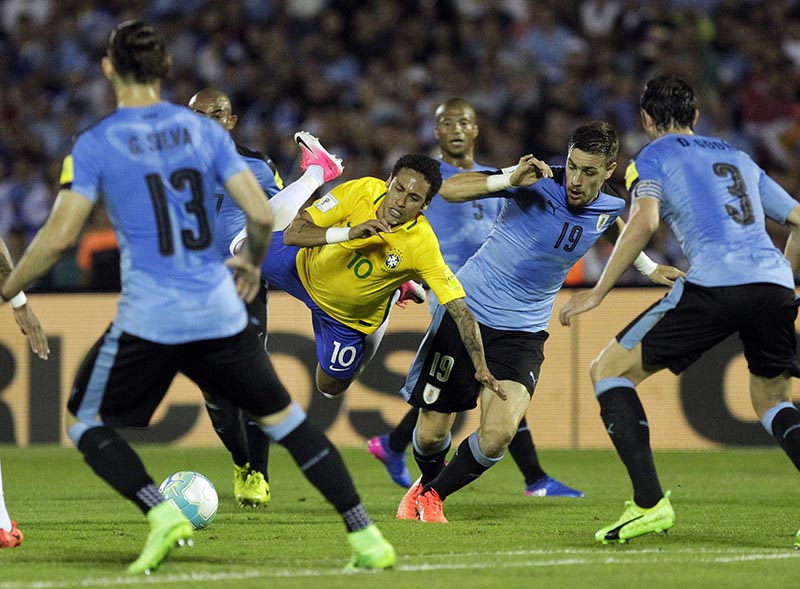 Brazil's Neymar (centre) fights for the ball with Uruguay's Sebastian Coates, second from right, during a 2018 World Cup qualifying soccer match in Montevideo, Uruguay, on Thursday, March 23, 2017. Photo: AP
SAO PAULO: Brazil was not intimidated by more than 60,000 raucous fans at the Estadio Centenario in Montevideo, beating second-place Uruguay 4-1 in South America's World Cup qualifying group to retain the lead in the standings after 13 matches. Midfielder Paulinho scored a surprising hat trick, with Barcelona star Neymar adding another, to keep their team firmly on course for football's main event in Russia next year. Brazil is still to lose a point under coach Tite, who took over in September and secured on Thursday his seventh straight win in the South American qualifiers. Now the five-time World Cup champions total 30 points, seven more than Uruguay and 10 above the lowest place that could guarantee a berth in the next World Cup. With five games to play, Brazil could qualify next Tuesday with victory over Paraguay if Ecuador and Chile fail to win their games. Argentina beat Chile 1-0 thanks to a penalty scored by Lionel Messi and managed to stay in the chase for a spot in the tournament, going third with 22 points. Chile is in sixth, outside the qualification zone. Fourth-place Colombia also needed a penalty to score a 1-0 home victory against Bolivia. Elsewhere, seventh-place Paraguay beat fifth-place Ecuador 2-1 and bottom team Venezuela drew 2-2 with eighth-place Peru. Brazil For the first time since September, a team scored against Brazil. A blunder by defender Marcelo led goalkeeper Alisson to foul striker Edinson Cavani only 7 minutes after kick off. That allowed the Uruguayan to score his ninth goal in South American qualifiers, more than any other player. It was the first time coach Tite saw his team trail, and that happened against a team that had won all six home games. Ten minutes later midfielder Paulinho leveled the game with a blast from the edge of the box into goalkeeper Martin Silva's left corner. Scores remained level at halftime, but Brazil's dominance was evident. At 52 minutes, Paulinho scored again to put the visitors in front. The Estadio Centenario went silent. Uruguay stepped up the pressure to level, but Brazil was countering dangerously. On 74 minutes, Neymar's genius appeared. After defender Miranda cleared the ball from his box, the Barcelona star beat Uruguayan Coates in a quick race and lobbed Silva to make it 3-1 and score his first goal against Uruguay. By then the Montevideo stadium, which hosted the 1930 World Cup final, sounded more like the Maracana in Rio, with only Brazilian voices being heard. But that was not all. At 92 minutes, after Brazil wasted a series of other opportunities, Paulinho completed his hat-trick with his chest, after a cross from the right from Dani Alves. "Not in my wildest dreams I expected something like this," the Guangzhou Evergrande midfielder said after the match. Asked about the historic performance, coach Tite said it was "more than the expected." "I was happy about the 90 minutes ... our capacity to absorb a goal against us and keep playing based on one idea. Our team is very self-aware that it has to triangulate. We did more than controlling the match, we were dominant," he said in a post-match press conference. Uruguay resented the absence of suspended targetman Luis Suarez, while Brazil missed teenage sensation Gabriel Jesus, who has a broken toe. Brazil will miss defender Dani Alves in the clash against Paraguay on Tuesday in Sao Paulo -- the match that will likely secure its spot in the next World Cup. Uruguay will travel to face Peru. Argentina Messi's goal at 16 minutes gave Argentina a valuable victory, putting Edgardo Bauza's side once again in the qualification zone. The Chileans complained about the penalty decision, but failed to take advantage of an unimaginative Argentine team that managed to get few opportunities to score at the Monumental de Nunez in Buenos Aires. The result takes pressure off Argentina, a team whose players have refused to talk to the media because of criticism they have endured over recent games. Bauza had to speak some words, but they were not too encouraging for the team's future. "What matters is that we won," the coach said. "This was very difficult. It was like a knock-out stage." His Chilean counterpart Juan Antonio Pizzi disagreed. "I consider it totally unfair that we lost," he said. "We managed to control the virtues of the Argentinians, and they are many. We deserved to get one goal." Messi was a dominant figure in the match, not only in creating space but also in marking Chilean rivals. The Chileans could not count on midfielder Arturo Vidal and towards the end of the match were only offering opportunities to the hosts. In the next round, Argentina will travel to Bolivia. The last time the Argentinians won in La Paz was in 2005. For that match Bauza won't count on suspended midfielder Javier Mascherano and striker Gonzalo Higuain. Chile will take on Venezuela at home.
#South American qualifying #Brazil vs Argentina #WCup
You May Also like: