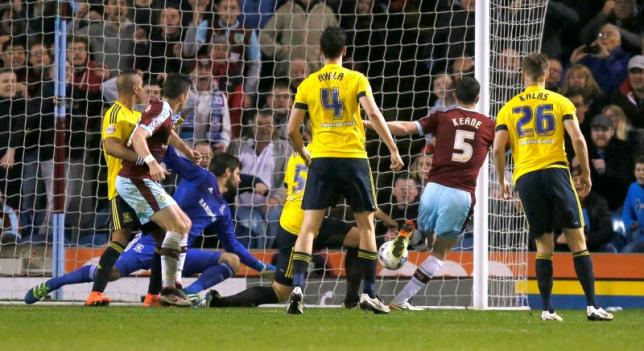 Burnley's Michael Keane scores their first goal
Mandatory Credit: Action Images / Jason Cairnduff
Livepic
Michael Keane's injury-time equaliser against leaders Middlesbrough kept promotion hopefuls Burnley second in the English Championship on goal difference from Brighton and Hove Albion on Tuesday. While the top-two clash ended in a dramatic 1-1 draw at Turf Moor, Brighton thumped Queens Park Rangers 4-0 to press their claim for automatic promotion to the riches of the Premier League. Middlesbrough have 86 points with Burnley and Brighton level on 84. Hull City and Derby County both won and are tied on 76 with Sheffield Wednesday, who drew 0-0 at home to relegation-threatened MK Dons, in the last playoff place on 70. Aitor Karanka's Boro took the lead through Jordan Rhodes in the 70th minute, his fifth goal since joining from Blackburn in January, after narrowly missing out when Albert Adomah hit the bar in the first half. Burnley looked like slipping back into the playoff places until Keane bundled home from a half-cleared corner on the left two minutes into stoppage time. The goal ended the visitors' six-match winning streak and stretched Burnley's unbeaten run in the league to 20 games. At the other end, Charlton Athletic were relegated to the third tier after a goalless draw at bottom club Bolton Wanderers. MK Dons look doomed to join them, their draw at Sheffield Wednesday leaving them nine points adrift of safety with three games remaining.
#Brighton #Michael Keane #Burnley
You May Also like: