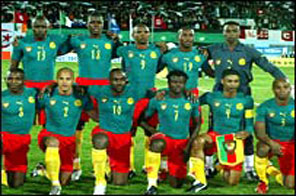 JOHANNESBURG: Cameroon coasted to a 2-0 win in Morocco Saturday and clinched a record sixth appearance for an African team at the World Cup.

The 'Indomitable Lions' took a one-point lead over Gabon into the final round of Group A fixtures and stretched it to four by full-time as their only rivals for a place at the 2010 finals in South Africa fell 1-0 away to Togo.

Achille Webo put Cameroon ahead on 18 minutes in Fes and three-time African Footballer of the Year Samuel Eto'o added a second soon after half-time against a poor Moroccan team.

Qualification was a personal triumph for French coach Paul Le Guen, who took over last August from German Otto Pfister with Cameroon bottom of the table having secured just one point from two outings.

Cameroon booked a passage to South Africa a few hours after Nigeria topped Group B by winning 3-2 in Kenya and they join South Africa, automatic qualifiers as hosts, Ghana and Ivory Coast as African representatives.

Egypt or Algeria, who clash later Saturday at the Cairo Stadium, will fill the remaining place.

#Cameroon coast to record sixth World Cup appearance
You May Also like: