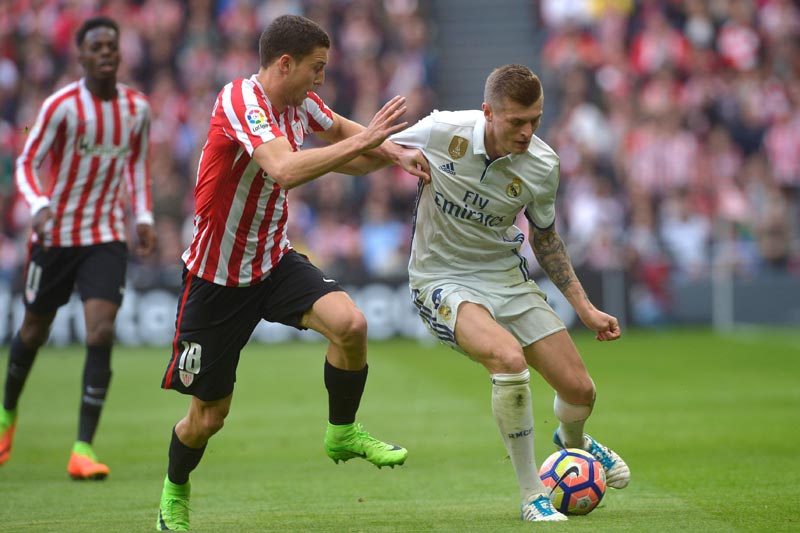 Athletic Bilbao's Oscar de Marcos and Real Madrid's Toni Kroos in action. Photo: Reuters
BARCELONA: Real Madrid went five points clear a the top of La Liga after coming through a testing game at Athletic Bilbao to win 2-1 thanks to Brazilian midfield linchpin Casemiro's strike on Saturday. Karim Benzema fired Real ahead in the 25th minute with an exquisite first-time finish from a Cristiano Ronaldo cross after Casemiro had begun the move with a clever long ball from the halfway line. Athletic worked hard to get back into the game and, after Real keeper Keylor Navas produced a brilliant save to deny Inaki Williams, veteran striker Aritz Aduriz headed the home side level from close range in the 65th minute. Casemiro restored Real's lead in the 68th, however, by controlling Ronaldo's flicked header from a corner and calmly taking his time to tuck the ball into the net from close range, thanks to some careless defending. Real lead La Liga on 65 points, five clear of second-placed Barcelona, who have also played 27 games and host Valencia on Sunday. Zinedine Zidane's side had returned to the top of the table last week after capitalising on Barcelona's shock defeat at Deportivo La Coruna with victory over Real Betis. But the coach faced criticism for the team's leaky defence, which had shipped nine goals in the previous five league games. They knew they would be tested by an Athletic side who had the second-best home record in the league and had not lost at home since being beaten by Barcelona in August. The Basques made a more energetic start and nearly took the lead when Raul Garcia acrobatically volleyed at goal, catching Keylor Navas off guard although the goalkeeper reacted well to tip the shot away to safety. Ronaldo had a frustrating day in front of goal, first having a strike ruled out for offside and then seeing a hooked effort turned away by Athletic goalkeeper Kepa Arrizabalaga, yet he played a crucial role in Real breaking the deadlock. DIFFICULT GROUND The Portuguese latched onto Casemiro's lofted pass and generously squared to Benzema, who added to his two goals at San Mames in last year's 2-1 win by meeting the bouncing pass first time and sending the ball into the far corner. Ronaldo also contributed to the winner soon after Athletic had clawed their way back into the game, glancing Toni Kroos's corner to the back post where Casemiro was waiting to seal Real's fourth straight win in all competitions. "We've picked up points at a very difficult ground after being on the back foot for a long time. We played with a lot of character in a game that was vital for us to stay on our good run," Zidane told reporters. "We interpreted the game very well. We knew that picking up points here would be very difficult. We've got 11 games left, we're top, but it doesn't mean anything. We know we still have some very difficult games to come." Also on Saturday Real Sociedad's hopes of clinching the fourth Champions League spot in La Liga faded after they lost 1-0 at neighbours Alaves, where Brazilian forward Deyverson scored the only goal of the game a minute before halftime. The visitors had Esteban Granero sent off after the break for a second booking. Real Sociedad are sixth in the standings on 48 points, level with Villarreal, who were beaten 1-0 at Las Palmas on Friday, and four behind Atletico Madrid, who can extend the gap if they beat Sevilla on Sunday. Eibar, meanwhile, moved to within three points of seventh-place Athletic Bilbao after drawing 1-1 with Espanyol, who are ninth with 40 points, one behind Eibar.
#Barcelona #Real Madrid #La Liga #Athletic Bilbao #Casemiro #Spanin
You May Also like: