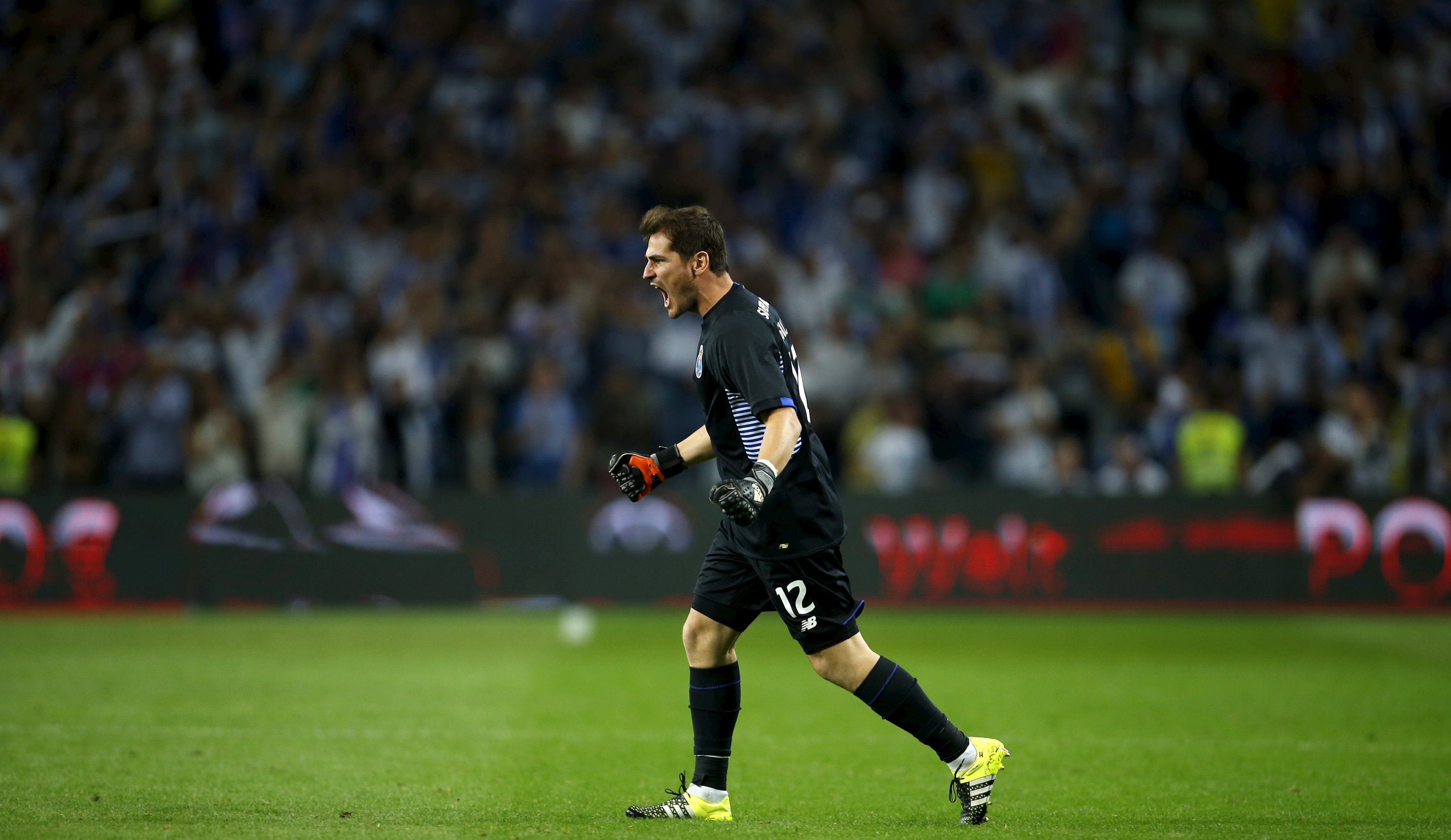 Porto's goalkeeper Iker Casillas celebrates the goal of his teammate Andre Andre during their Portuguese premier league soccer match against Benfica at Dragao stadium in Porto, Portugal September 20, 2015. Photo: Reuters
LISBON: Porto goalkeeper Iker Casillas is set to break the Champions League appearance record when Chelsea manager Jose Mourinho makes his latest return to the Estadio do Dragao on Tuesday. The pair had a difficult relationship during Mourinho's three years at Real Madrid, but after the Portuguese left, Casillas captained the team to victory over neighbours Atletico Madrid in the 2014 final, earning his third winner's medal. He played his 151st match in the competition as Porto, who he joined in July, drew their opening Group G match 2-2 away to Dynamo Kiev. That equalled the record set by former Barcelona midfielder Xavi, and Casillas is on the verge of breaking it. Both teams go into the game after dropping points in 2-2 draws away to lowly opposition at the weekend. Porto were held by Moreirense on Friday night and suffered injuries to two players. Algerian midfielder Yacine Brahimi, who scored five goals in nine Champions League games last season, hurt his right knee and was replaced at halftime. Centre-back Maicon ended the match with a sprained ankle and is among several players that coach Julen Lopetegui said will have to be assessed ahead of the game. Defender Ivan Marcano is available after suspension and Lopetegui will be back on the touchline after being banned for the match in Kiev. Despite only drawing with Moreirense, the coach said he was happy with the way his team played, while admitting that Porto's inability to take their chances ultimately cost them victory. They remain top of the table on goal difference from Sporting Lisbon and are unbeaten in 12 games in all competitions. Chelsea's comfortable 4-0 win at home to Maccabi Tel Aviv on Matchday One was a welcome respite after two successive Premier League defeats. They subsequently beat Arsenal 2-0 but on Saturday were held 2-2 at Newcastle United, only salvaging a draw with two goals in the last 11 minutes from Brazilians Ramires and Willian. Mourinho rated their first half performance "minus one out of ten" after a game that left the English champions 15th in the table. Spanish international striker Diego Costa, serving a domestic suspension, will be available in Porto, where Mourinho became a hero by leading the Dragons to 2004 Champions League success. He has taken Chelsea there twice before in the competition, losing 2-1 later that year and drawing 1-1 in 2007, while they won 1-0 under Carlo Ancelotti in 2009.
#Champions League #Chelsea #Iker Casillas #Jose Mourinho #Porto
You May Also like: