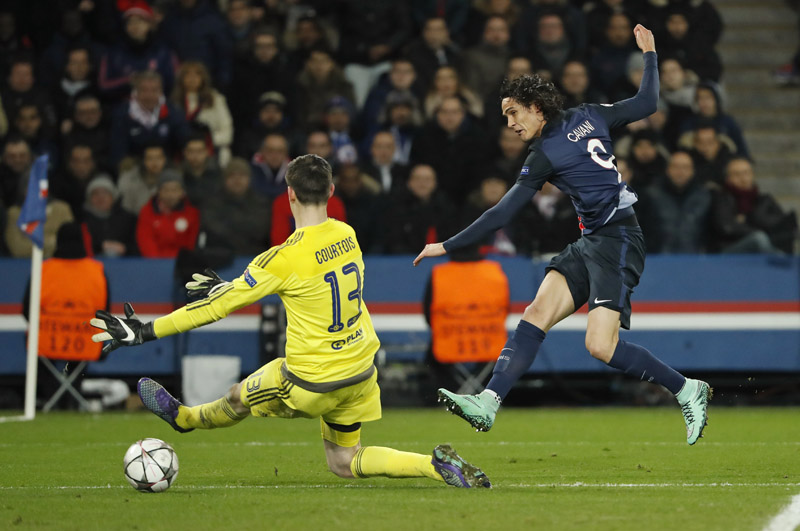 The Uruguay forward, who has scored only once in Ligue 1 this year, fired a low angled shot past goalkeeper Thibaut Courtois in the 78th minute after John Obi Mikel had cancelled out Zlatan Ibrahimovic’s opener at the end of the first half.

That did not surprise PSG coach Laurent Blanc, who brought Cavani on for Lucas four minutes before he got the winner. “I’m not just saying it because he scored tonight, I always say it, Eddy is a player who can score,” Blanc told a news conference. “He was going through a tough period so I hope it will give him his confidence back.”

PSG knocked Chelsea out on away goals at the same stage last year after the Blues had prevailed the previous season in the quarter-finals and have the edge going into the second leg.

but they will fancy their chances at Stamford Bridge on March 9.

With Chelsea’s inspirational captain John Terry ruled out with a hamstring injury, Branislav Ivanovic moved from full back to central defence and wore the skipper’s armband. Marco Verratti started for PSG having only just recovered from a groin injury, while Blanc chose to field Marquinhos on the right side of defence in place of the Serge Aurier.

Chelsea had the best chance midway through the first half when striker Diego Costa’s point-blank header was instinctively palmed on to the bar by PSG keeper Kevin Trapp. Ibrahimovic, who was sent off in London last year and picked up a yellow card on Tuesday, broke the deadlock six minutes before halftime with a low free kick deflected past Courtois by the heel of Obi Mikel, who had fouled Brazilian Lucas.

But Chelsea hit back just before the interval when Costa deflected a corner into the path of Mikel, who controlled the ball before firing home his first goal in 14 months. Lucas was replaced in the 74th minute by Cavani who had an immediate impact, collecting Angel Di Maria’s perfect pass on the right and scoring with a low shot through Courtois’s legs.