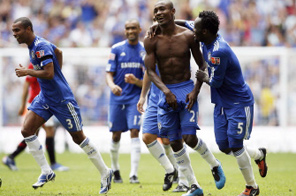 COBHAM: Chelsea defender Ricardo Carvalho believes the pain of so many near-misses in the Champions League can inspire his side to finally win the competition.

The Blues lost the 2008 final on penalties against Manchester United and have been beaten at the semi-final stage four times in six seasons.

Last season's exit to Barcelona was especially agonising as the west London club were within seconds of the final when Andres Iniesta struck a stoppage-time equaliser to send the Spaniards through.

Didier Drogba and Jose Bosingwa led the protests to Ovrebo but both over-stepped the line and were hit with three- and two-match European suspensions respectively.

Carvalho, speaking on Monday ahead of Tuesday's Champions League opener at home to Porto, said: "It hurts a lot. We have reached the final once but we missed that great opportuntity. We were a little bit unlucky.

"But it is important to get there, then you have more opportunities to win it. I hope this year we can get back to the final.

"To win the Champions League with Chelsea would be great but you need luck. You need to work very hard because in this tournament you can only play one game at a time.

"We have reached the final once before and we want to do it again, but we have to take it one match at a time."

Chelsea could be forgiven for feeling the whole world is against them at present as they come to terms with the two-year transfer ban handed down by FIFA for inducing French teenager Gael Kakuta to leave Lens.

But Carvalho claims the players are unconcerned by matters that are out of their control.

"I don't think it affects us. We have to train well and play. Maybe the board think it is not fair, but as a player you have to play," he said.

Carvalho is also confident Chelsea can cope without Ivory Coast striker Drogba during his ban.

"He's important for us but he's going to miss the games and it's better to miss games now than later in the competition," Carvalho said.

"It's important to have all the players available but you can't use it as an excuse. We have to do the best we can because winning the game is the responsibility of all the team."

Tuesday's match will have special meaning for Portugal defender Carvalho, who spent six years with Porto and won the 2004 Champions League with them during Jose Mourinho's reign.

Mourinho took Carvalho to Stamford Bridge when he was appointed Chelsea boss but the 31-year-old still looks out for his old team's results.

It's always special to play against Porto - I spent lovely years there and I grew there as a man and a player," he said.

"It's great for them to always be at the top of the league and in the Champions League."

#Champions League pain can inspire Chelsea - Carvalho
You May Also like: