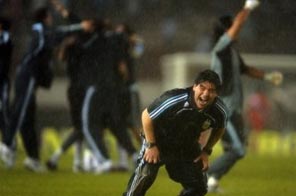 BUENOS AIRES: Diego Maradona's Argentina side struggled past doormat Peru 2-1 to set up a Wednesday showdown at Uruguay for a World Cup 2010 berth while Chile booked a place in South Africa by beating Colombia 4-2.

The penultimate night of South American qualifying matches for next year's global football showdown saw Argentina avoid a shocking upset in stoppage time while Chile made an impressive qualifying run pay off on two second-half goals.

Martin Palmero, recalled to the national side by Maradona after a decade's absence and inserted at the start of the second half, tapped in a goal in the second minute of stoppage time after Peru had equalized in the 90th minute.

"The victory gives us new life," Maradona said. "It was a very dramatic finish. Now we go to Uruguay to play for a place in the World Cup."

After being booed off the field following a goal-less first half and looking undone, Argentina has a one-point edge over Uruguay heading into their showdown for the last automatic World Cup spot from South America.

Gonzalo Higuain took a pass from Pablo Aimar and scored from an angle in the 48th minute to give Argentina a 1-0 lead.

But Peru, a side with two wins in 17 final-round qualifying matches, stunned the hosts in the 90th minute when Hernan Rengifo headed home an equalizer in a driving wind and rain.

Much-crtiticized Maradona, the retired star player whose rocky tenure as coach would be considered an epic failure if Argentina misses the World Cup, found salvation thanks to Palmero.

Argentina improved to 7-6 with four drawn in qualifying for 25 points entering a showdown match next Wednesday at Uruguay, which won 2-1 at Ecuador to remain on Argentina's heels at 6-5 with six drawn and 24 points.

Whichever side wins will book the last automatic spot in the World Cup finals, joining Brazil, Paraguay and Chile.

The loser would need help to hold off Ecuador for fifth place, which would book a berth against North America's fourth-place finisher to decide a berth in South Africa.

Should Argentina and Uruguay draw, Argentina would have the edge for the last automatic spot while Ecuador would need to rout Chile to overcome a goal-difference edge for Argentina and nudge them out of fourth.

Host Colombia opened the scoring when Chile's Arturo Vidal put the ball in his own net, but Waldo Ponce answered for Chile in the 34th minute and Humberto Suazo added another in the next minute for a 2-1 Chilean halftime lead.

Giovanni Moreno pulled the hosts level in the 63rd minute but the Chileans, knowing a victory would book them a World Cup berth, grabbed the lead for good on Jorge Valdivia's goal in the 70th minute.

Antonio Valencia put Ecuador up in the 68th minute but Luis Suarez answered for Uruguay in the next minute and Diego Forlan hit the winner on a penalty four minutes into stoppage time to give Uruguay the victory.

Paraguay edged Venezuela 2-1 to eliminate the hosts from any chance at an automatic spot. Salvador Cabanas scored in the 56th minute and Oscar Cardozo added a goal in the 80th minute for Paraguay. Alexander Rondon answered in the 86th for Venezuela, which most hope to reach South Africa by the playoff route.

#Chile qualifies #Argentina struggles in WC drama
You May Also like: