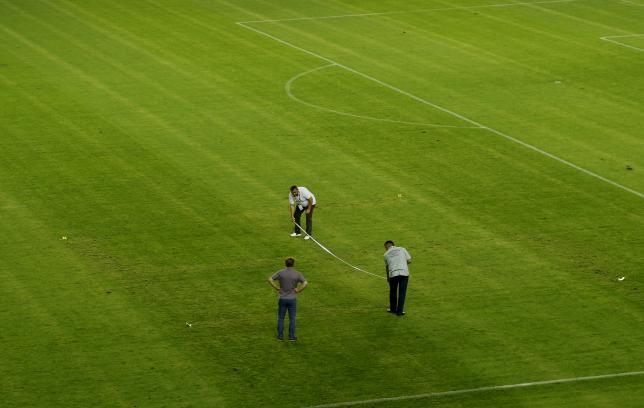 Police officers are seen on a pitch where the faint pattern of a swastika (L) is seen after the game between Croatia against Italy in Euro 2016 Group H qualifying soccer match at the Poljud Stadium in Split, Croatia, June 12, 2015. Photo: Reuters/File

ZAGREB: Croatian Prime Minister Zoran Milanovic has urged European soccer body UEFA not to impose heavy sanctions on the national team after a swastika was imprinted on the pitch of a stadium in Split last month.

"I understand there will most probably be sanctions against the Croatian Football Association but I want to appeal for UEFA's understanding," he wrote in a letter to UEFA chief Michel Platini.

The letter was made public by the government.

"Draconian sanctions that would hurt or even halt the national side's progress in Euro qualifications... would destroy the national team, leave an indelible scar on the souls of Croatian fans and inflict long-lasting damage on soccer in Croatia," it said.

The swastika became visible during the match after a chemical agent was put on the grass at Split's Poljud stadium days before the June 12 Euro 2016 qualifier against Italy.

Croatia were already playing the match behind closed doors after being handed a one-match ban for racist chants by their fans in a 5-1 home win over Norway in Zagreb in March.

That followed incidents during a 1-1 draw against Italy in Milan last November when flares were hurled on to the pitch.

Croatia are top of Group H with 14 points from six games, two ahead of Italy and four clear of Norway.

Some local pundits have speculated that UEFA, losing patience with Croatia's unruly fans, might ban the national team from the finals in France.

Milanovic said the incident has been "clearly and strongly condemned by all political parties and state institutions and met with contempt of a large majority of Croats".

"We have launched an exhaustive criminal investigation and hope that the perpetrators will soon be found," he wrote. "I appeal to you...not to allow to have Euro 2016 played without the participation of all the best national teams".