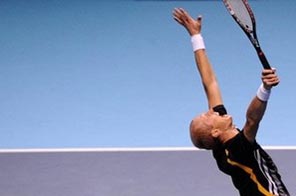 LONDON: Russia's Nikolay Davydenko won the ATP World Tour Finals title Sunday with a straight sets victory over Argentina's Juan Martin del Potro at London's O2 Arena.
Last year's beaten finalist Davydenko won 6-3, 6-4 in an hour and 24 minutes to claim the season-ending title, disputed among the world's top eight players.
The win meant Davydenko jumped up the rankings to finish the season as the world number six, while Del Potro remains at number five.
The Russian scooped 1,510,000 dollars in prize money, while the Argentinian collected 740,000 dollars.
Davydenko became the first Russian to win the season-ending tournament.
"Coming here as number seven and winning the tournament, I surprised myself," said Davydenko, who downed the Australian Open champion Rafael Nadal, French Open and Wimbledon title holder Roger Federerand US Open champion Del Potro en route to claiming the title.
Del Potro told him: "Congratulations, you had a great, great week, you beat everybody, you are a great, great champion."
Both finalists finished second in their groups. In Saturday's semi-finals, Davydenko beat Swiss world number one Federer 6-2, 4-6, 7-5, while Del Potro defeated Sweden's Robin Soderling 6-7 (1/7), 6-3, 7-6 (7/3).
The pair had only met three times before, with their last clash coming in the round-robin stage of this tournament last year. Davydenko triumphed in a 6-3, 6-2 victory in Shanghai.
The Russian entered the match with a 2-1 overall lead. Both his victories were on hard courts like the O2 Arena.
The win meant Davydenko won all five finals he contested this season, while Del Potro won three and lost two.
The match was dominated by full-blooded baseline rallies, with Davydenko looking the most dangerous in the first set, making greater inroads on the Argentinian's serve and mixing up the play with drop shots.
US Open champion Del Potro, 21, won the toss and chose to receive. Davydenko won the opening game to love and, after Del Potro held serve, the Russian served a second game to love.
Davydenko scampered round the court next game to keep himself in a point at 15-15, winning a thrilling duel at the net. He then took the game to deuce with a forehand winner down the line.
Last year's beaten finalist had a second break point after Del Potro was called for a foot fault, and won the game, leaving the Argentinian glaring at the baseline judge.
Del Potro won his first point on the Russian's serve when Davydenko hit the net but the 28-year-old still comfortably held serve next game for a 4-1 lead.
After being distracted by a baby screaming, Del Potro then held serve, winning the game with a fierce smash.
Del Potro had break point in the seventh game on a double fault but Davydenko forced a deuce with a forehand winner and converted his advantage at the second time of asking.
The Argentinian served with new balls to stay in the set at 5-2 down and though Davydenko took him to deuce, Del Potro hung on.
However, the Russian held three set points in the next game and won it when Del Potro fired long.
In the second set, Del Potro turned up the aggression and gave Davydenko a tougher challenge, though it was not enough to overcome the Russian.
The first two games of the set went with serve before both players served to love.
In the fifth game, Davydenko had a break point when Del Potro hit the net, but the Argentinian won the game on the second deuce.
Del Potro then had a break point next game when Davydenko shot wide but the Russian took it to deuce with an ace and won it on the second deuce.
The Argentinian then served to love for a 4-3 lead.
Davydenko held serve, then gained three break points in the following game, piling the pressure on Del Potro. He won it when the Argentinian shot wide following a lengthy rally.
On a roll and serving for the match, Davydenko got to match point with an ace and won it when Del Potro returned a smash into the net.

#Davydenko downs Del Potro for world finals crown
You May Also like: