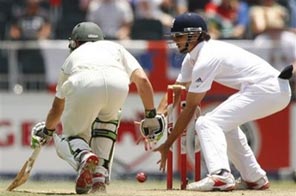 JOHANNESBURG: AB de Villiers survived two television reviews and an apparent umpiring mistake as he and Mark Boucher stretched South Africa's lead on the third day of the fourth and final Test against England at the Wanderers Stadium on Saturday. Skip related content

De Villiers (43 not out) and Boucher (51 not out) put on an unbeaten 89 for the sixth wicket after three wickets fell early in the day.

Only two runs had been added when overnight batsmen Hashim Amla and Jacques Kallis were dismissed in successive overs, to be followed by JP Duminy.

At that stage South Africa were only 55 runs ahead and with a new ball due within seven overs England appeared to have clawed their way back into the match.

Just seven runs into his partnership with Boucher, De Villiers, on 11, was given out, caught at backward short leg off Graeme Swann, by umpire Tony Hill. De Villiers immediately sought a review and won a reprieve from television umpire Daryl Harper when replays showed the ball hit his forearm.

When he had 24, De Villiers was again given out by Hill, this time leg before wicket, when he padded up against Swann.

Again De Villiers sought Harper's intervention and replays showed the ball was missing the stumps. The batsman was doubly fortunate because the ball spun back from his pad and rolled against the stumps without disturbing the bails.

England's miseries with the review system continued when they squandered their last remaining review on an attempt to win an lbw decision for Swann against Boucher, only for De Villiers, on 41, to be given not out by umpire Steve Davis when replays showed clearly the ball had gone off the inside edge of his bat from bowler Ryan Sidebottom to wicketkeeper Matt Prior.

It emerged that England had asked the International Cricket Council to reinstate the review they had lost on Friday when Graeme Smith survived early on the way to a century through what they believe was a mistake by Harper.

But no response had been received in time to seek a review of the De Villiers not out decision.

#De Villiers rides luck as lead grows
You May Also like: