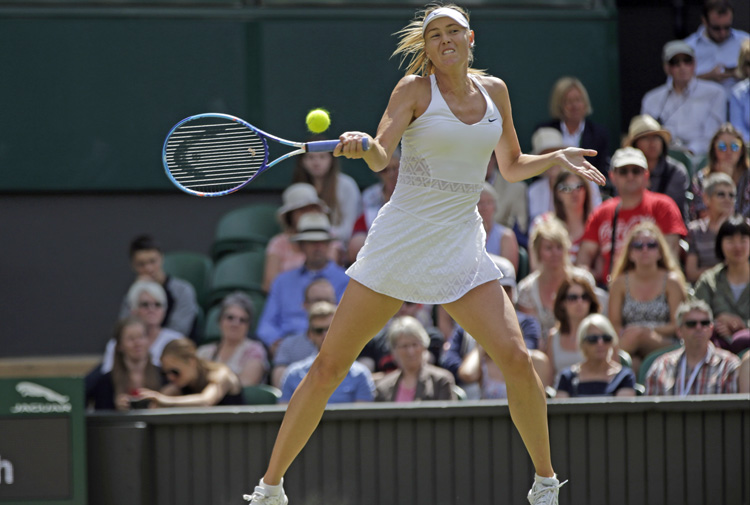 Maria Sharapova of Russia makes a forehand return against Coco Vandeweghe of the US during their Wimbledon match at the All England Lawn Tennis Championships in London on Tuesday. Photo: AP
LONDON, July 7 Novak Djokovic survived a one-set shootout with big-serving Kevin Anderson on Tuesday to advance to the quarter-finals and keep up his bid for a third Wimbledon title. Maria Sharapova battled into her first Wimbledon semi-final since 2011 with a 6-3, 6-7 (3/7), 6-2 victory over unseeded American Coco Vandeweghe. Russian fourth seed Sharapova, who won her only Wimbledon title in 2004, will play five-time champion Serena Williams or Victoria Azarenka for a place in final. Also, Garbine Muguruza became the first Spanish woman in 18 years to reach the Wimbledon semi-finals with a 7-5, 6-3 win over Timea Bacsinszky. The top-ranked Djokovic beat the 14th-seeded South African 7-5 in the fifth set on Court 1 to complete a match that had been suspended by darkness at two sets apiece. It took 45 minutes of play on Tuesday for Djokovic to advance to his 25th consecutive Grand Slam quarter-final with a 6-7 (6), 6-7 (6), 6-1, 6-4, 7-5 victory. He will next face Croatia’s Marin Cilic, a player he has beaten in all 12 previous matches. “I was two sets down. To come back and win in five definitely gives me great satisfaction and confidence for the next challenge,” Djokovic said. “It was frustrating at times, especially today, but I managed to go through, and that’s what matters.” Djokovic struggled throughout the match in trying to tame the 6-foot-8 Anderson’s huge serve, but broke him to go up 6-5 in the fifth set to set up his victory. “Kevin served exceptionally well,” Djokovic said. “I find that this was one of the most difficult matches I’ve played at Wimbledon, maybe in my career. At times, I was really helpless with my return.” Anderson finished with 40 aces, including three in the first game of the fifth set and eight overall in the decider. But it was two consecutive double-faults by Anderson that proved crucial, leaving him 15-40 down in the 11th game. Djokovic took advantage on the first break point, hitting a forehand return that dropped sharply at Anderson’s feet and forced an error. Djokovic served out the match in the next game, helped by two return errors from Anderson. With the loss, Anderson became the first player in the Open era to reach the fourth round at a Grand Slam seven times without ever advancing to the quarter-finals. Djokovic’s victory completed the men’s section last eight lineup.
#Novak Djokovic #Maria Sharapova #Kevin Anderson #Wimbledon #Serena Williams
You May Also like: