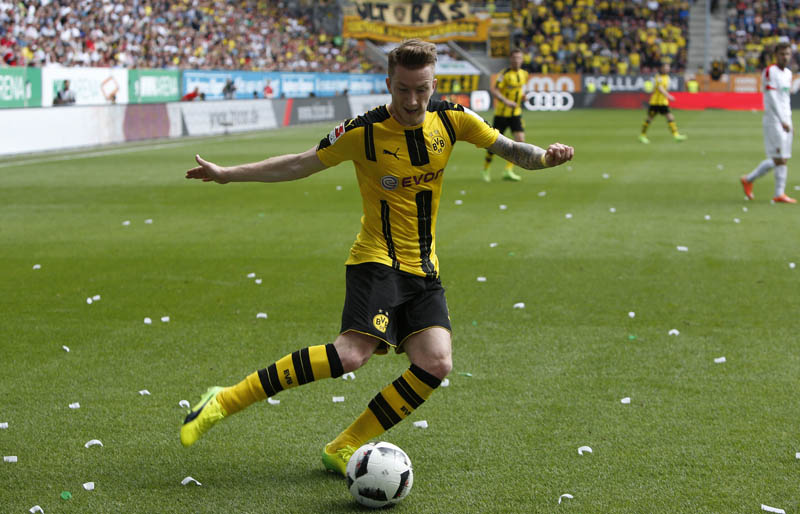 Borussia Dortmund's Marco Reus in action. Photo: Reuters
BERLIN: Marco Reus scored twice to steer third-placed Borussia Dortmund to a 4-0 victory over top-four rivals Bayer Leverkusen on Saturday, boosting the winger's chances of securing a place in Germany's World Cup squad. The 28-year-old Reus, who is racing to hit top form after a lengthy injury absence, could not have timed his stellar performance better with Germany coach Joachim Loew watching in the stands. The winger had considerable help, however, from England youth international Jadon Sancho, with the 18-year-old scoring his first Bundesliga goal and setting up another for Reus. Sancho, who joined Dortmund from Manchester City this season, put them ahead with a fine finish in the 13th minute as they looked to rebound from last week's Ruhr valley derby defeat to Schalke 04. Dortmund should have scored again as Sancho terrorised the Leverkusen defence with his speed and skill, but Reus saw his penalty saved and the hosts wasted several more scoring opportunities. Reus and Maximilian Philipp added two more goals in the second half before Reus got a deserved second after a superb cross to the far post from Sancho. Dortmund moved up to 54 points, three ahead of Leverkusen, who stay fourth, with three games left in the season. The top four teams qualify for next season's Champions League group stage. Schalke 04, in second on 55, travel to Cologne on Sunday. Struggling Hamburg SV battled past Freiburg 1-0 in their relegation derby to earn a lifeline in their desperate bid to stay up with three matches left. The former European champions, who are the only Bundesliga team to have played in the top division in every season since the league's creation in 1963, are in 17th place on 25 points, five behind Freiburg who are in the relegation playoff spot in 16th. Bayern Munich, already crowned champions, never hit top form in their 3-0 victory at Hanover 96 as they prepare to face Real Madrid in the Champions League semi-finals next week. They had to wait almost an hour to break the deadlock with substitute Thomas Mueller firing in from a Juan Bernat cross. Fellow substitute Robert Lewandowski added another with a header in the 73rd and Sebastian Rudy completed a comfortable afternoon for the champions. Hoffenheim's Mark Uth scored twice in his side's 5-2 demolition of RB Leipzig to climb above their opponents and into fifth place on 49. Leipzig are sixth on 47.
#Borussia Dortmund #Thomas Mueller #Bayer Leverkusen #Joachim Loew #Marco Reus #Germany Bundesliga #Mark Uth
You May Also like: