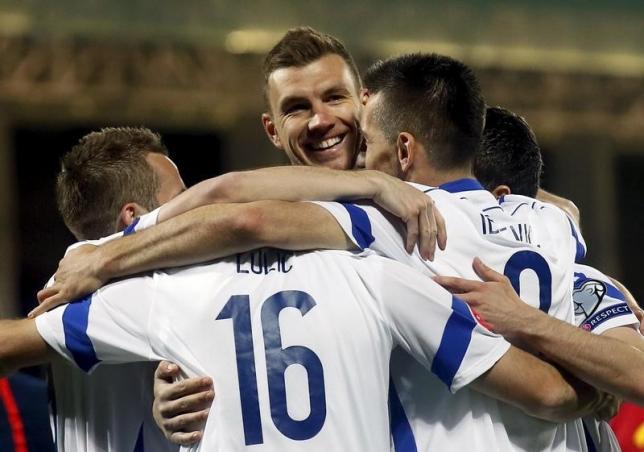 Bosnia and Herzegovina's Edin Dzeko (C) celebrates a goal with his team mates against Andorra during their Euro 2016 qualifier soccer match at Estadi Nacional stadium in Andorra La Vella, March 28, 2015. REUTERS
MILAN: Edin Dzeko ended a barren scoring run as he and Mohamed Salah struck in the last six minutes to give revived AS Roma a 3-1 win at Carpi in Serie A on Friday. Roma, who have come back to life since Luciano Spalletti replaced Rudi Garcia as coach last month, moved up to third after notching their fourth league win in a row. Dzeko's goal was his first since Nov. 21, when he netted against Bologna, and the Bosnian's fourth in Serie A this season. "We've recovered some of our strengths tonight and Dzeko's goal was an example of that," said Spalletti. Lucas Digne broke the deadlock for Roma with a long-range drive in the 56th minute only for Kevin Lasagna to pull second from bottom Carpi level when he tapped in Jerry Mbakogu's pass from close range. Roma went back in front when Salah tricked his way down the right and slipped the ball to Dzeko who had a simple job to tap home. Salah then rounded off the scoring a minute later. Roma have 47 points from 25 matches, one ahead of fourth-placed Fiorentina who play fifth-placed Inter Milan (45) on Sunday. Leaders Napoli (56) visit Juventus (54) on Saturday.
#AS Roma #Edin Dzeko
You May Also like: