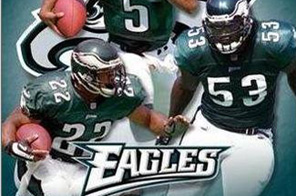 PHILADELPHIA: Donovan McNabb got a big raise instead of a longer contract.

McNabb and the Philadelphia Eagles have agreed to restructure the final two years of his contract. McNabb's new deal is worth $24.5 million over the next two seasons, a person familiar with the negotiations told The Associated Press.

A "significant" portion of McNabb's base salary for 2010 also is guaranteed, according to the source, who spoke on condition of anonymity because terms of the deal were not released. While signing bonuses are guaranteed in NFL contracts, base salaries usually are not.

The five-time Pro Bowl quarterback was due to make $19.2 million over the next two seasons. The team announced the restructured deal on Thursday night. The Eagles said McNabb and head coach Andy Reid would be available on Friday morning at the team's training facility.

"The Philadelphia Eagles organization and the entire city of Philadelphia are fortunate to have a quarterback the caliber of Donovan McNabb," Reid said in a statement. "He has proven himself to be a talented player on the field, a caring member of the Philadelphia community, and a winner."

McNabb's future in Philadelphia seemed bleak after a terrible slump midway through last season resulted in his first career benching. He was yanked at halftime of a 10-7 game at Baltimore on Nov. 23, and the Eagles eventually lost to the Ravens 36-7.

But McNabb returned for the next game and was outstanding down the stretch, leading the Eagles to the NFC championship game against Arizona after two road victories in the playoffs. It was Philadelphia's fifth appearance in the conference title game under McNabb. The Eagles are 1-4 in those games and lost to New England in their only trip to the Super Bowl in 2005.

In 2002, McNabb signed a $115 million, 12-year contract extension through the 2013 season. But the last three years of that contract were voided when he reached incentive clauses and he is signed only through 2010.

McNabb, who turns 33 in November, made it clear last season that he wanted a new deal so he can play his entire career in Philadelphia, where's he's been intensely scrutinized and both celebrated and often criticized for his play. His agent and the Eagles discussed an extension, but the two sides settled on restructuring his current contract for now.

"We are thrilled that this all worked out," team president Joe Banner said. "He is a great football player, a great person, and someone who gives back to the community. We are lucky to have him in Philadelphia."

McNabb, who is entering his 11th season with the Eagles, is the franchise's all-time leader in several categories, including passing yards (29,320) and touchdown passes (194). He also has led the team to the playoffs seven times, best in team history.

"Donovan has played a large part of this team's success over the last 10 years," Eagles chairman Jeffrey Lurie said. "He has been a professional in every sense of the word."

#Eagles give McNabb $5.3 million raise
You May Also like: