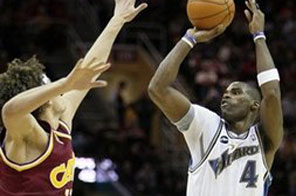 WASHINGTON: Antawn Jamison addressed fans and spoke of being "very embarrassed." The coach has banned gambling on the team plane and told his story to law enforcement authorities. The team is doing its best to remove all traces of Gilbert Arenas from the Verizon Center, the place where he infamously brought some guns to work.

It's been no fun being a member of the Washington Wizards.

"It's been going on too long — long enough," Jamison told reporters Friday. "We're definitely sick of it, too much negative publicity, and I think guys are just to the point where we just want to get some positive publicity and turn things around and start winning some games, start having fun. We haven't had fun in a while, so my New Year's resolution is just to have fun, go out there and play hard and do everything possible to start winning."

It was another day of distractions for the Wizards, who face the weighty task of setting aside their troubles and trying to move forward without their leading scorer. Arenas has been banned indefinitely by the NBA while under investigation by federal and local authorities for possible violations of the strict gun laws in the nation's capital. He has acknowledged keeping guns in his locker at the Verizon Center and taking them out in a "misguided effort to play a joke" on a teammate.

"There's no question it's a distraction, from the standpoint of having to deal with talking to people, the media," coach Flip Saunders said. "It's almost a surreal situation — you're almost are more in a foggy-type situation."

Saunders said that he met with the grand jury investigating Arenas on Thursday and that some of his players "had to deal with that" on Friday between the morning shootaround and the evening game against the Orlando Magic. He did not say how many players met with which authorities or give any other details.

Saunders also confirmed that he banned gambling on the team plane on Dec. 21, the date of the locker room confrontation between Arenas and Javaris Crittenton in which Arenas pulled out guns he was keeping in his locker. Various reports have given conflicting details of what happened between the two players, but their dispute began during a card game on a trip home from the West Coast two days earlier.

Saunders said he instituted the ban because gambling "led to a confrontation" and he wanted "to avoid those situations" from happening again.

"You can only give people what they can handle, and obviously we didn't handle it very well," guard Mike Miller said. "It's on each organization. They made a stance here — and it's probably a good stance."

Before tipoff Friday at the first home game since Arenas' suspension, Jamison walked to the center of the court with a microphone and told the fans "it's been a trying week" and spoke of the need to be positive role models.

He specifically mentioned a photo taken of the team laughing at Arenas' antics before Tuesday's game at Philadelphia, where Arenas pointed his index fingers at his teammates as if he were firing a pair of guns.

The Wizards are planning to fine some of the players for displaying such levity over a serious matter, an NBA official with direct knowledge of the team's plans has told The Associated Press.

"We never meant to make light of the situation," said Jamison, who added that the whole situation was "very embarrassing for my teammates and the coaching staff."

The fines could be contingent in part on whether the incident was planned ahead of time by Arenas and teammates. Jamison, one of the players smiling in the photograph, told reporters the photo doesn't tell the whole story.

"A lot of guys didn't know what was going to take place," Jamison said. "A lot of guys didn't see that happening. I know you see the photo and you see a certain image, but that photo doesn't justify the way guys viewed the whole situation. Once again, it's just another use of poor judgment."

Jamison further implied that Arenas was acting on his own.

"You think we're going to initiate something serious like that?" Jamison said. "If you know me, you shouldn't ask that question."

The photograph was one of the final straws for commissioner David Stern, who had intended to wait until the legal process played out before taking action against Arenas. Instead, Stern announced the suspension the following day, declaring Arenas "not currently fit to take the court" and warning of potentially worse sanctions down the road.

The Wizards have done their best to get Arenas out of sight, if not out of mind. The team has told him not to attend practices, games or other team functions and has removed a huge banner featuring his photograph from the side of the arena. He has also been edited out of the pregame video played before the start of the game, and Arenas-related merchandise items — including those coveted No. 0 jerseys — are no longer for sale in the building.

The Wizards, whose team president before the season of spoke of wanting "to do some damage" in the playoffs, entered Friday night's game with an 11-22 record. But the Wizards' No. 1 challenge isn't stopping the likes of Dwight Howard — it's trying to carry on while the likes of Letterman and Leno are making fun of the team on national television.

There's mundane matters to consider. Saunders tapped Randy Foye to start at point guard in Arenas' place Friday night, and the coach is allowed to have only 11 players active during the first five games of Arenas' suspension.

Arenas was one of three team captains — although there was always debate as to whether he was suited for that role — but Saunders said will not name a replacement. Jamison and Caron Butler are the other captains.

Then there's the future of the roster as a whole. The Wizards could try to void the remainder of Arenas' six-year, $111 million by invoking a morals clause, and team president Ernie Grunfeld might break up the rest of the struggling team as the trade deadline approaches.

#'Embarrassed' Wizards deal with Arenas gun saga
You May Also like: