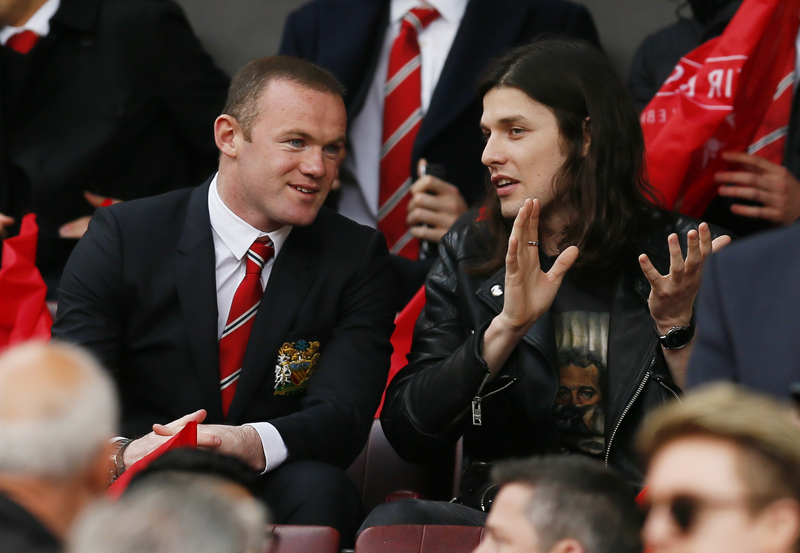 Manchester United's Wayne Rooney and musician James Bay in the stands
during Barclays Premier League game against Everton at Old Trafford on April 3, 2016. Photo: Reuters
MANCHESTER: England captain Wayne Rooney emerged unscathed when he played just over an hour for Manchester United's Under-21 side at Old Trafford on Monday, having missed 12 first-team matches with a knee injury. The striker last featured for his club in a 2-1 defeat at Sunderland on Feb. 13 but looked fit, if ring rusty, in a 1-0 win over Middlesbrough's Under-21s. The only goal came from Paddy McNair eight minutes after the over-age Rooney's planned exit. Manager Louis van Gaal was among a 6,000-plus crowd who turned up on a cold, wet night to see the return of England's 51-goal record scorer as he began his comeback two months before their opening European Championship match against Russia in Marseille on June 11. Rooney, 30, had a speculative long-range shot early on that posed no problem to Middlesbrough keeper Joe Fryer and also sent a free kick high over the crossbar in the second half. England manager Roy Hodgson has indicated Rooney will be in the squad for the Euros when he names it in a month's time, as long as he is "mechanically fit". Rooney now has a maximum of nine United first-team matches before the end of the season to regain his sharpness. They have six Premier League games left and could play three more matches in the FA Cup if they win Wednesday's sixth-round replay at West Ham United and go on to reach the final. Van Gaal would welcome a fully-fit Rooney back to his first-team squad as soon as possible to help revive their chances of claiming a Champions League place next season. After losing 3-0 at Tottenham Hotspur on Sunday, United are fifth in the table, four points behind Manchester City who occupy the fourth and final Champions League slot.
#Wayne Rooney #Manchester United #England
You May Also like: