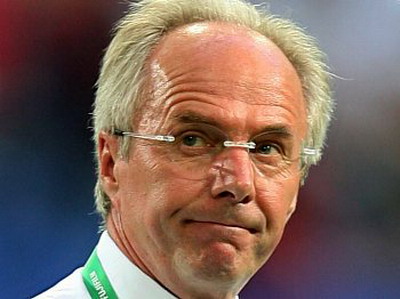 LONDON: Sven-Goran Eriksson, the former England manager, on Sunday warned England of the danger of over-expectations as the World Cup finals draw ever nearer.

Eriksson, who led England to the quarter-finals four years ago as well as in 2002, before defeats to Brazil and then Portugal on penalties, said he believed Fabio Capello's side had it in them to match or even exceed those showings.

The Swede noted stalwarts such as Frank Lampard "are more mature today than four years ago."

But he said the fervour of the fans back home often brought its own problems - especially given the team's impressive qualifying form.

"As usual England have won the World Cup almost before the first kick - it's always like that," Eriksson told BBC radio.

Eriksson shocked the football world last summer when after parting company with Mexico, where he spent an ill-fated spell in the national side's hotseat, before announcing his arrival of director at fourth tier side and the oldest club in the league Notts County.

The club promptly announced an ambitious five-year plan to reach the English Premiership after a takeover by Munto Finance.

However, executive chairman Peter Trembling took over from Munto in December and County are now seeking investors, prompting Eriksson to admit the plan is now "on hold."

"There have been too many bad things at Notts County in the last six months. But hopefully in just a couple of weeks it'll take off again," Eriksson told BBC Radio 5 Live.

Eriksson, who went to Mexico after a year in charge of Manchester City, also looked back at his time in the City hotseat before the club became the richest side in the world following a buyout by Sheikh Mansour bin Zayed al-Nahyan.

"I came at the wrong moment," he joked, having been jettisoned before he had the chance to get his hands on the transfer kitty that has since been available to City.

"I think it's a dream for every manager in the world to have that kind of money," said Eriksson, adding he had talked to new coach Roberto Mancini, who last month took over from sacked Mark Hughes and who now has what the Swede terms "a golden opportunity" to buy his way to success.

Eriksson added that he thought it unlikely he would take another international hotseat, despite reported interest from his homeland prior to his arrival at Notty County.

#Eriksson warns England of high-expectations
You May Also like: