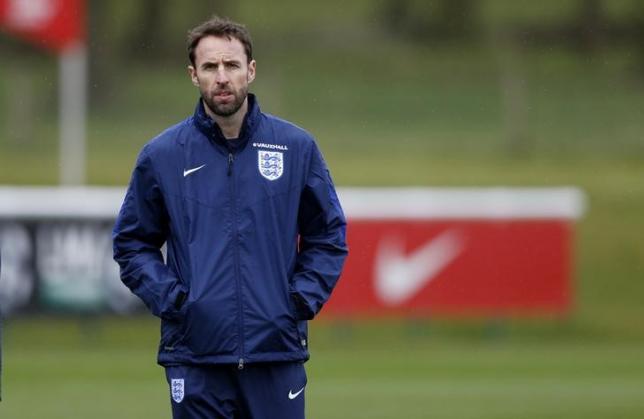 England U21 manager Gareth Southgate during training
Mandatory Credit: Action Images / Carl Recine/ Livepic
Gareth Southgate, the bookmakers' favourite to be the new England manager, does not want the job either on a temporary or permanent basis, the BBC reported on Thursday. England's Under 21 manager had been widely tipped to teke over on a temporary basis while the Football Association conducts a review of England's failure at Euro 2016 and looks for a permanent successor to Roy Hodgson, who quit on Monday. But the BBC said the England job "is not what Southgate wants at this stage" either on a permanent or temporary basis. Southgate, however, remains favourite at 5-1 with bookmakers William Hill. Former England coach Glenn Hoddle is 11/2 with U.S. coach Juergen Klinsmann at 7/1, coming in from 25/1. Arsenal coach Arsene Wenger is 12/1. England went out of Euro 2016 in the second round after a 2-1 defeat by Iceland.
#Euro 2016 #England #Gareth Southgate
You May Also like: