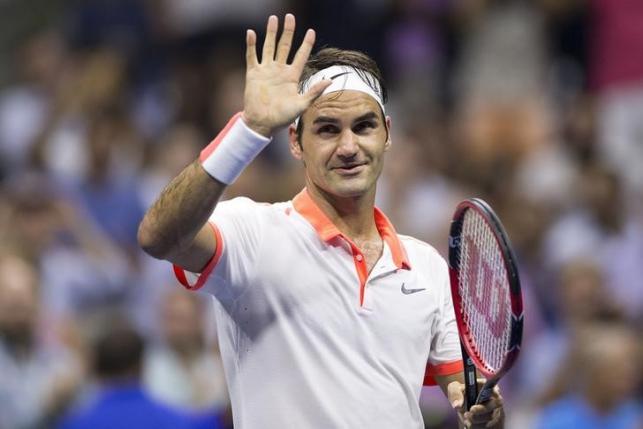 Roger Federer of Switzerland waves to the crowd after winning his second round match against Steve Darcis of Belgium at the U.S. Open Championships tennis tournament in New York, September 3, 2015. REUTERS
NEW YORK: Roger Federer kept up his sprint through the early rounds of the US Open on Thursday, steamrolling Steve Darcis of Belgium 6-1 6-2 6-1 to reach the third round of the year's final grand slam. Federer took just 80 minutes to dispatch the 66th-ranked Darcis under the lights at Arthur Ashe Stadium and has lost just nine games in his first two matches. In an ominous warning to his rivals, Federer said his early form points to a successful fortnight at Flushing Meadows, one of his favourite haunts. "Very often I start this tournament quite strong," said the 34-year-old. "It's always gone quite well for me. I've always enjoyed conditions here - the balls, the speed of the court, the atmosphere in the arena. "I think this is another good year." Federer won five US Open titles in a row from 2004 to 2008 but has not made it to the final in New York since finishing runner-up in 2009. The evergreen Swiss is feeling confident this time after a strong season and impressive build-up to the event. He was a finalist at Wimbledon in July and has captured five ATP titles this year, including last month's Cincinnati Masters, where he defeated Novak Djokovic in the final. Playing with free-flowing aggression, Federer fired 11 aces and a total of 46 winners past Darcis while committing 25 errors. Comfortable in the New York spotlight, he matched Serena Williams for the most U.S. Open wins at night, improving his record to 29-1. "I've enjoyed myself so many times, so many years," he said in an on-court interview. "It's wonderful that I can still experience it and play this well. It's great. "I hope this is not my last one, of course." Federer's next opponent is Germany's Philipp Kohlschreiber, a straight-sets winner over Czech Lukas Rosol.
#Roger Federer #US Open
You May Also like: