Federer vs. Soderling in the Fianl French Open 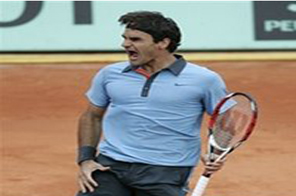 PARIS : A relieved Roger Federer leaned on the net following his latest French Open escape, then looked up to accept a handshake from his 6-foot-6 opponent, Juan Martin del Potro.
"I just congratulated him and wished him good luck," del Potro said. "I said everybody wants him to lift the trophy at the end."
Federer is the French Open favorite, sentimental and otherwise. He'll play his fourth consecutive Roland Garros final Sunday, with one big difference this year: He's facing Robin Soderling, not Rafael Nadal.
Soderling, an upset winner against Nadal in the fourth round, extended his improbable Roland Garros run by beating Fernando Gonzalez in a seesaw semifinal Friday, 6-3, 7-5, 5-7, 4-6, 6-4. Federer then came from behind twice to beat del Potro, 3-6, 7-6 (2), 2-6, 6-1, 6-4.
In the all-Russian women's final Saturday, top-ranked Dinara Safina was to seek her first Grand Slam title against 2004 U.S. Open champion Svetlana Kuznetsova.
Federer will bid for his 14th major title to match Pete Sampras' record, and he'll try to become the sixth man to win all four Grand Slam titles. He lost to Nadal in Paris each of the past four years, the last three times in the final, but he's 9-0 against Soderling.
"Obviously it's nice to see someone else for a change in the French Open final," Federer said.
For a long time Friday, it appeared Federer would again stumble on the tricky clay. Sensing his once-a-year opportunity again slipping away, he slapped himself in the face after losing one frantic rally.
Maybe that helped. And maybe he was buoyed by a crowd that kept chanting "Ro-ger! Ro-ger!"
"I hope one day I would be the idol of the crowd the way Roger was today," del Potro said.
Federer broke for the first time 2 1/2 hours into the match to lead 3-1 in the fourth set. Del Potro lost his next two service games as well, allowing Federer to sweep seven games in a row and finally take the lead.
By then, Federer was in top form. He won a frantic rally and a standing ovation by lunging to slice a forehand into the open court for a 3-1 lead in the fifth set. There were more winners down the stretch, including on the last two points.
"I think I definitely started to play a bit better," Federer said. "I was able to play more consistent and also mix it up well."
It was his second big comeback this week. He overcame a two-set deficit to beat Tommy Haas in the fourth round.
Next up: Soderling, who scrambled the draw with his win Sunday over Nadal, the four-time defending champion.
The Swede is beyond the third round for the first time in 22 career major tournaments, and he'll play in his first clay-court tournament final.
"I surprised myself a little bit, I have to say," Soderling said.
"He's playing the tennis of his life," Federer said. "Look, there are no easy Grand Slam finals. It's very simple, because the one who is on the other side of the net has also won six matches and is definitely in the shape of his life. I cannot obviously underestimate Robin."
Against Gonzalez, Soderling let a big lead slip away when he lost his serve in the final game of the third and fourth sets. He trailed 4-1 in the final set, then swept the final five games with the kind of shotmaking that has carried him through the tournament.
"I did what's supposed to be impossible, beating Nadal on clay," Soderling said. "So it was great, but today it was a semifinal. They're both going to be matches that I will remember for the rest of my life, but in different ways."
Soderling has won one of 20 sets against Federer, but it's not like the Swede isn't capable of pulling off an upset.
"Yeah, I think I have a chance," Soderling said. "I lost a lot of times, but it has been close matches. As I said before the match against Nadal, if I don't believe I can win, there's no point on going on the court."

#Federer vs. Soderling in the Fianl French Open
You May Also like: