Ferdinand 'not to blame' for England defeat: Capello 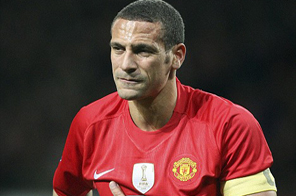 ENGLAND: Fabio Capello insists England defender Rio Ferdinand should not be held responsible for his side's 1-0 qualifying defeat against Ukraine.
Capello saw England's unblemished record in Group Six come to an end on Saturday as Serhiy Nazarenko's deflected first half goal in the Dnipro Stadium sunk his 10 men.
The turning point of a fiery encounter, which was marred by Ukraine fans repeatedly throwing flares onto the pitch, came when Ferdinand made a woeful misjudgement that led to England goalkeeper Robert Green being dismissed.
Ferdinand allowed a long ball to bounce past him to Artem Milevskiy, who was brought down in the penalty area by Green as he tried to save.
After initially appearing to send off Ferdinand, Slovenian referee Damir Skomina showed Green a red card, making him the first England goalkeeper to be sent off.
Andriy Shevchenko missed the penalty, but England never really recovered and Ukraine pushed home their one-man advantage through Nazarenko's strike.
Ferdinand's blunder wasn't the first by the Manchester United centre-back in an England shirt recently. He was also at fault for a goal in England's friendly draw in Holland in August.
But Capello preferred to point the finger of blame at the referee rather than Ferdinand, who has also been below-par for United during an injury-hit start to the season.
"He made one mistake, that is all, and that was for the penalty," Capello said.
"Normally I don't speak about referees. This time I am changing my mind. It was a big mistake.
"Rio was running, the goalkeeper is diving. I need someone to explain to me how he can get that wrong.
"I spoke with the fourth official when the referee showed Rio the red card. He said he would tell the referee it was not Rio.
"The referee thought Rio had fouled the player but it so obviously was not him."
Capello confronted Skomina after the final whistle heralded his first defeat in a competitive game as England coach.
But the Italian's frustration didn't extend to his team despite their spluttering display.
In the first half they could have been several goals behind as the defence creaked after Green's dismissal.
Wayne Rooney led a more spirited second half effort but England rarely went close to an equaliser as their eight-match winning run in qualifying came to an end.
At least Capello could take heart from the fact that his team's place at next year's World Cup in South Africa had already been secured in convincing fashion.
"I am proud of my team. In the second half we played very well and created a lot of chances, right until the very last minute," he said.
With Green suspended for Wednesday's final qualifier against Belarus at Wembley, Portsmouth goalkeeper David James, who came on for the West Ham stopper when he was sent off, is likely to regain his position between the posts.
Capello may also have to pick a replacement for Steven Gerrard after the Liverpool midfielder was substituted at half-time with a groin injury.
Ukraine coach Alexiy Mikhailychenko saluted his team's performance as they defeated England for the first time.
The victory moved them above Croatia into second place and a victory in Andorra on Wednesday should guarantee a play-off place.
"I am really pleased to get this result," Mikhailychenko said. "We still have a game to win but we have given ourselves the best possible chance."

#Ferdinand 'not to blame' for England defeat: Capello
You May Also like: