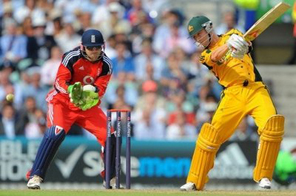 England's Matt Prior (left) looks on as Australia's Micheal Clarke bats during the first international one day cricket match at The Oval in London. Callum Ferguson's career-best 71 was the centrepiece of Australia's 260 for five against England in the first one-day international. Source: AFP/Andrew Yates

LONDON: Callum Ferguson's career-best 71 was the centrepiece of Australia's 260 for five against England in the first one-day international at the Oval here on Friday.
Ferguson, who might have been out for nought, surpassed his previous best at this level of 63 against South Africa at Cape Town in April, during a composed 75-ball innings featuring five fours in what was the 24-year-old's 15th match at this level.
Cameron White made 53 with medium-pacer Paul Collingwood, whose first six overs cost 22 runs, taking two wickets for 47, to check Australia's progress after England's Ashes-winning captain Andrew Strauss won the toss and fielded in the first of this seven-match series.
While world champions Australia scored briskly against England's quicks, they found runs harder to come by off leg-spinner Adil Rashid (10 overs for 37) and Collingwood, who had a hand in three of the five wickets to fall.
England struck in the third over when Tim Paine was run out for nought by Collingwood's direct hit.
But from 11 for one, Shane Watson (46) and White rebuilt the innings with a fifty stand off 56 balls.
Collingwood broke the second-wicket stand when Watson tried to turn the ball legside but instead got a leading edge and gave a gentle return catch.
Watson faced 50 balls with six fours and added 82 with White.
Australia didn't score a boundary for 39 balls.
White though batted stylishly for a fifty in 64 balls with seven fours.
But White was run out when, going for a second, he failed to beat Graeme Swann's throw from deep square leg to wicketkeeper Matt Prior.
Ferguson was then fortunate not to be lbw to Rashid while still on nought.
Rashid did not concede a boundary until his eighth over when Michael Clarke, leading Australia in the absence of the resting Ricky Ponting, edged a cut.
Clarke and Ferguson put together a stand of 79 but off a relatively sedate 109 balls.
And Clarke, trying to force the pace, exited for 45 when he sliced a drive off Collingwood to Owais Shah at cover, having faced 72 balls with just three boundaries to leave Australia 190 for four in the 43rd over.
Australia accelerated well in the last 10 overs to score 82 runs.
SCOREBOARD
Australia
S. Watson c and b Collingwood 46
T. Paine run out (Collingwood) 0
C. White run out (Swann/Prior) 53
M. Clarke c Shah b Collingwood 45
C. Ferguson not out 71
M. Hussey b Sidebottom 20
J. Hopes not out 18
Extras (lb3, w4) 7
Total (5 wkts, 50 overs) 260
Fall of wickets: 1-11 (Paine), 2-93 (Watson), 3-111 (White), 4-190 (Clarke), 5-237 (Hussey)
Bowling:
Anderson 7-0-35-0
Broad 9-1-52-0
Sidebottom 7-0-48-1
Wright 1-0-9-0
Rashid 10-0-37-0
Collingwood 9-0-47-2
Swann 7-0-29-0
England: Andrew Strauss (capt), Ravi Bopara, Matt Prior (wkt), Owais Shah, Paul Collingwood, Luke Wright, Stuart Broad, Adil Rashid, Graeme Swann, Ryan Sidebottom, James Anderson
Toss: England
Umpires: Tony Hill (NZL) and Nigel Llong (ENG)
TV umpire: Peter Hartley (ENG)
Match referee: Roshan Mahanama (SRI)

#Ferguson anchors Australia in ODI opener
You May Also like: